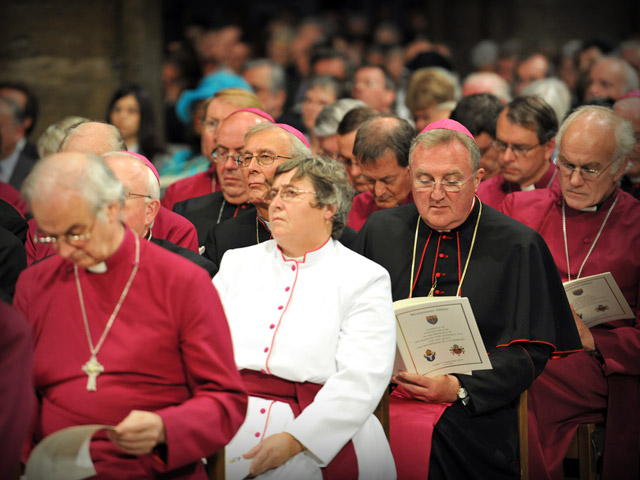 The Rochester Report: Women Bishops in the Church of England?

The Department of Dialogue and Unity of the Catholic Bishops’ Conference of England and Wales issued a response to the Rochester Report.

In the introductory remarks, the document states:

This remains the case today.

In a post-Plenary press conference in November 2012, when asked by a journalist how the rubber stamping of the move towards women bishops would impact on dialogue between the Catholic Church and the Church of England, Archbishop Vincent Nichols said:

“Obviously there are women bishops in the Anglican Communion already and, in that sense, the fundamental position of the Anglican Communion is clear. I don’t think that it will fundamentally alter the level of dialogue and cooperation between us – that is based on a strong appreciation of our shared life in Christ, through baptism, and within the life of grace. But it will create an additional sense of an identity within the Church of England that is less approximate to the Catholic tradition. The dialogue will continue but this is a significant step.”

You can listen to the clip from the press conference by using the player in the top right-hand corner of this page. Alternatively click on the link below the player to download.

What is ARCIC III? It is the third phase of the International Anglican-Roman Catholic Commission – a body that seeks to identify common ground between the two Churches. It had its first meeting in May 2011 and used a method of dialogue called ‘receptive ecumenism’. This method seeks to facilitate ecumenical progress by learning from the other, rather than simply asking the other to learn from us. Receptive ecumenism is more about self-examination and inner conversion than convincing the other. Archbishop Bernard Longley of Birmingham is the Co-Chair for the Catholic Church alongside Anglican Archbishop David Moxon of the New Zealand dioceses.

NEWS
17/05/2011
Archbishop’s Commitment to Christian Unity
Archbishop Bernard Longley shared his thoughts and hopes for a new chapter in ecumenical dialogue when ARCIC III began in 2011.

NEWS
28/05/2011
Final Communique from the Meeting of ARCIC III*
This includes a short interview with Mgr Mark Langham of the Pontifical Council for Promoting Christian Unity on the discussions that took place in Bose, northern Italy, in May 2011.

cbcew.org.uk/christian-unity
Our section on the Bishops’ Conference site focusing on Christian Unity