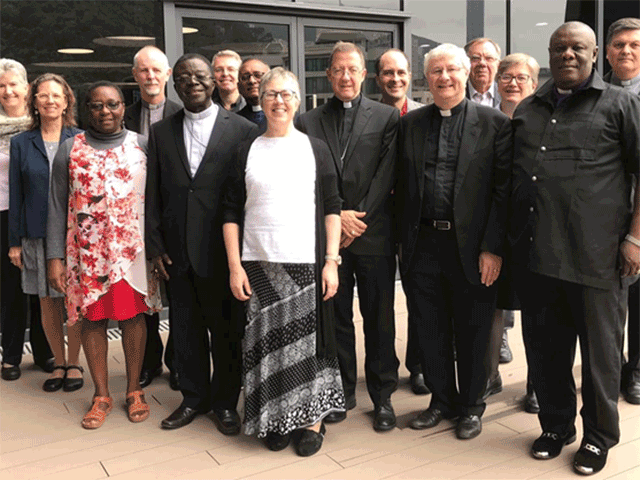 The Joint International Commission for Theological Dialogue between the World Methodist Council and the Roman Catholic Church met in Hong Kong from Friday 12 to Friday 19 October 2018, hosted by the World Methodist Council with support from the Methodist Church in Hong Kong. The joint commission wishes to record its gratitude to the Methodist Church in Hong Kong, especially its General Secretary, Ms Katherine Ng, for considerable practical assistance in arranging visas and accommodation at the Wesley Ozo Hotel and providing conference facilities at Wesleyan House – the church’s new headquarters building. Thanks are due also to Rev. Dr Karen Westerfield Tucker, Methodist Co-Secretary, for her work in preparing this year’s meeting The commission’s first engagement on arrival was to share in evening prayer in the Sky Chapel on the twenty-second floor of Wesleyan House, with its panoramic views of the Hong Kong skyline.

In this second plenary meeting of the present round of conversations, the commission continued its theological dialogue on the subject of reconciliation as this relates in particular to the unity of the Church. A number of papers addressing specific aspects of reconciliation had been commissioned at our meeting in 2017. These papers were presented and discussed in Hong Kong. The commission agreed the outline structure of our report, which bears the working title ‘God in Christ reconciling’. Members of the commission were assigned to produce preliminary drafts of each chapter of the report for presentation and discussion at next year’s plenary meeting. The final report will be presented to the World Methodist Council meeting in Gothenburg in 2021.

The joint commission hosted a dinner attended by representatives of the Catholic diocese of Hong Kong’s ecumenical commission and the Methodist Church in Hong Kong, during which we heard of the important work being done among the Christian churches. We are grateful to Miss Theresa Lumo Kung for organising this event and for the work she has undertaken particularly in translating ecumenical documents.

On our final evening, the Methodist Church in Hong Kong hosted a dinner in honour of the joint commission. Afterwards, the co-chairs of the joint commission led a well-attended seminar for local Methodists and Roman Catholics on the subject of Methodist-Roman Catholic dialogue. The co-chairs presented copies of The Call to Holiness: From Glory to Glory (Houston, 2016) to representatives of the Catholic diocese of Hong Kong and the Methodist Church in Hong Kong.

The joint commission will meet at the Mariapolis (Focolare) Centre in Nairobi from 11 to 18 October 2019, hosted by the Pontifical Council for Promoting Christian Unity.