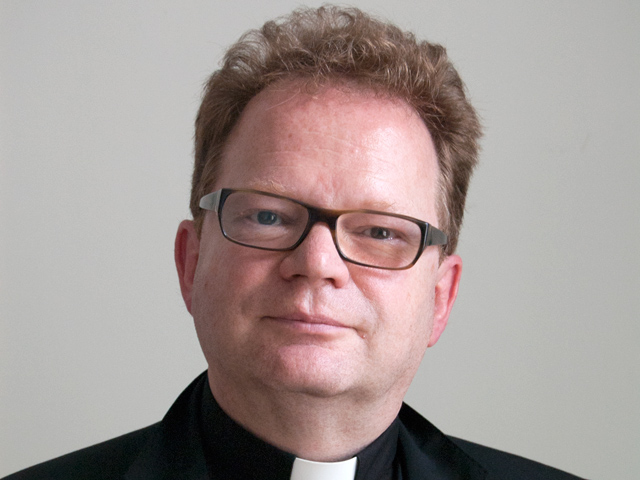 A new Catholic Bishops’ Prisons Advisor has been appointed by the Bishops’ Conference of England and Wales.

The Catholic Chaplain to HM Prison Feltham, Fr Roger Reader, will replace Monsignor Malachy Keegan who steps aside from the role after many years in this key position, both as the Principal Roman Catholic Chaplain and then as Catholic Bishops’ Prisons Advisor, a post he helped to create in 2011.

Monsignor Malachy Keegan and Bishop Terence Brain, the former Bishop for Prisons, were tasked with building the initial foundations for this new role, with a view to handing on the baton to a new Bishop and a new Chaplain once the foundations were firmly in place. Bishop Richard Moth was appointed as the new Bishop for Prisons in late 2012 and Fr Roger Reader will begin his new role on 1 September 2013.

There are presently a record number of Catholic prison chaplains, some 220, working in 142 prisons. The Catholic Bishops’ Prisons Advisor is responsible for the day to day provision of Catholic Sacramental and Pastoral care in prisons. He serves as a bridge between the Bishops’ Conference and Prison Chaplaincy Headquarters; he deals specifically with the recruitment and appointment of Catholic chaplains and offers support for Catholic chaplains and oversight of their work. He is the key prison liaison person for the bishops and supports the resettlement of offenders. He also speaks into the national debate on how the Catholic community looks at issues of crime, justice, punishment and mercy.

After 16 years working within prisons full time, Monsignor Malachy is not leaving prison work entirely, he will continue to offer sacramental and pastoral care in a local prison as well as help to establish resettlement schemes for former offenders. He has also been asked to promote prison chaplaincy in Europe. Monsignor Malachy has a particular interest in evangelisation and adult catechesis and will also continue his work as a psychotherapist. He will return to life as a parish priest in West Byfleet.

“I am pleased to be passing on the role of Catholic Bishops’ Prison Advisor to Fr Roger. This new role has enabled the Catholic faith community to exercise more influence than previously, in the world of criminal justice and prison chaplaincy. It has made access to prisons much easier and led to greater support for prisoners, prison service staff, chaplains and volunteers. It maintains a strong and warm partnership with the publicly-funded state agency of HMP Prison Service but retains its independent voice.”

Fr Roger Reader is a priest of the Diocese of Westminster. He was ordained in 1995 and has worked full time in prisons since 1998, first as chaplain at HM Prison Whitemoor (three years) and then for 12 years at HM Prison Feltham. He is a former Anglican and worked part-time for six years at HM Prison Pentonville during his nine years as an Anglican clergyman.

In his first posting as a Assistant Priest in New Southgate for the Diocese of Westminster, he asked whether he could return to prison ministry and permission was given by the then Cardinal Basil Hume.

“It’s a great privilege to be able to proclaim the Gospel of hope in places which seem without hope.

“Building on the good work which has been established in this new role through Bishop Brain and Monsignor Malachy Keegan, I’m looking forward to getting started.”

“We owe a great debt of gratitude to Monsignor Malachy Keegan for his dedicated service in this important field of the Church’s pastoral ministry. He has done much to raise awareness of the needs of the prison population and the role of the chaplain.

“He has made a particular contribution in the field of prisoner resettlement management, involving parishes and volunteers. Our prayers and good wishes go with him as he moves back into parish ministry.

“Fr Roger takes up this post at a time of many changes for the prison service. He brings great experience to the role and, in collaboration with the Prison Service, will do much to support our chaplains in their pastoral care for the prisons community.”