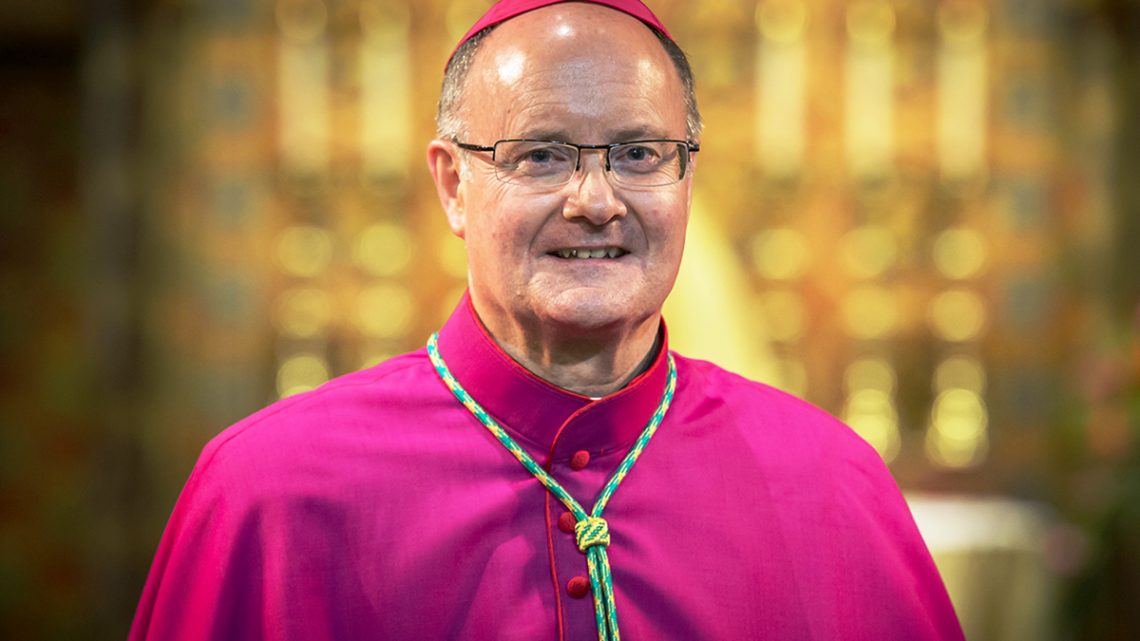 Pope Francis has appointed Monsignor Patrick McKinney, a priest of the Archdiocese of Birmingham, as tenth Bishop of Nottingham.

Monsignor Patrick McKinney was born on 30 April 1954, the eldest son of Patrick and Bridget McKinney, originally from Ireland, and brought up in Birmingham. He began his studies for the priesthood at in St Mary’s College, Oscott, the Archdiocese of Birmingham’s seminary for the training of priests, in 1972, and was ordained to the priesthood on 29 July 1978 in St Mary’s Church, Buncrana, Co Donegal, Ireland, where his family lives.

After his Ordination he was appointed assistant priest in the parish of Our Lady of Lourdes, Yardley Wood, Birmingham, and chaplain to St Thomas Aquinas Secondary School, Kings Norton, Birmingham. Between 1982 and 1984, he was a student at the Gregorian Pontifical University, Rome, where he gained a Licence in Sacred Theology. Returning to the Archdiocese of Birmingham, he taught fundamental theology in St Mary’s College until 1989, when he was appointed Rector of St Mary’s College, a post he held for nine years, during which period he was also a lecturer in ecclesiology, the theology of the Church.

He was made a Prelate of Honour in 1990 and a member of the Metropolitan Chapter of St Chad in 1992, and has served for a time as Chair of the Birmingham Archdiocesan Ecumenical Commission.

Mgr McKinney was appointed tenth Bishop of Nottingham in succession to Most Rev Malcolm McMahon OP, Archbishop of Liverpool, on 14 May 2015, and will be ordained to the episcopate by Cardinal Vincent Nichols, Archbishop of Westminster, in St Barnabas’ Cathedral, Nottingham on Friday 3 July 2015.

“Throughout my priestly ministry, now almost 37 years, I have always tried to do my best in whatever has been asked of me. In this I have been deeply conscious of God’s abundant grace and mercy, and I have been greatly sustained by the prayerful support of my brother priests, the deacons and religious in the Archdiocese of Birmingham, and by the prayers of the parishioners whom I have been privileged to serve. I will miss them all very much.

“Now, as I prepare prayerfully to give of my best in the service of the Diocese of Nottingham, I ask for the prayers of everyone there. I look forward to getting to know all the priests, the deacons, religious, and lay men and women of the Diocese, and also working alongside other Christians and those involved in interreligious work and dialogue in service of the wider community.

“I am deeply conscious of the rich legacy left by my predecessors as bishop, especially Bishop Malcolm McMahon, now Archbishop of Liverpool. I know a little of the diocesan You are Living Stones parish renewal programme which he had begun, encouraging everyone in the Diocese to work together in serving the missionary outreach of the Church, and I will do my best to build upon this.

“I also wish to thank Mgr Thomas McGovern, for the most able way in which he has acted as Diocesan Administrator this past year, and the College of Consultors who have worked closely with him. I have much to learn as I prepare to take up my new ministry within the Diocese of Nottingham, but am greatly looking forward to it.”

Monsignor Thomas McGovern, who has been Diocesan Administrator of the Diocese of Nottingham for the last twelve months, said:

“I was very pleased to learn of Mgr Pat McKinney’s appointment as tenth Bishop of Nottingham. He will find a warm and friendly welcome here in this Diocese, and I speak on behalf of all the priests, deacons, religious and people when I say how much we are looking forwarding to working with him to proclaim the Good News of Jesus Christ to the people of the towns, cities and beautiful countryside of the East Midlands. He will bring many fine qualities, as a teacher and as a pastor, to our Diocese, and we will benefit greatly from having him as our Bishop.”

The Most Reverend Malcolm McMahon OP, Archbishop of Liverpool and Bishop of Nottingham from 2000 until 2014, said:

“The Diocese of Nottingham is a big Diocese with a big heart, and I hope that Mgr McKinney will be as happy as Bishop of Nottingham as I was for almost fourteen years.

The Most Reverend Bernard Longley, Archbishop of Birmingham, the Diocese in which Mgr McKinney has served a priest until now:

“I am delighted that Pope Francis has chosen Mgr Pat McKinney from among the priests of the Archdiocese of Birmingham to serve as Bishop of Nottingham. During his years as Theology Tutor and Rector at St Mary’s College, Oscott, Mgr McKinney supported many Nottingham seminarians on their journey towards Ordination and he will be equally dedicated in serving the clergy and lay faithful of his new Diocese as their shepherd and friend.

“Mgr McKinney’s many years as parish priest and local dean and his skills as a theologian and teacher will equip him well in leading the Diocese of Nottingham into the coming Jubilee Year of Mercy. As an accomplished hill-walker I am sure he will come to love the landscapes of his new Diocese as much as the counties of Worcestershire and Staffordshire that he knows so well.”

Mgr McKinney’s parishioners at Our Lady’s and All Saints in Stourbridge, his brother priests, the Auxiliary Bishops and I will miss him greatly as he leaves the Archdiocese of Birmingham, but he will now take up his new responsibilities in Nottingham with enthusiasm and with the prayers and affection of all of us.

The Diocese of Nottingham, erected in 1850, covers most of Leicestershire, Derbyshire, Lincolnshire, Nottinghamshire and Rutland. Some 30,000 people attend Mass in its 108 parishes every Sunday.