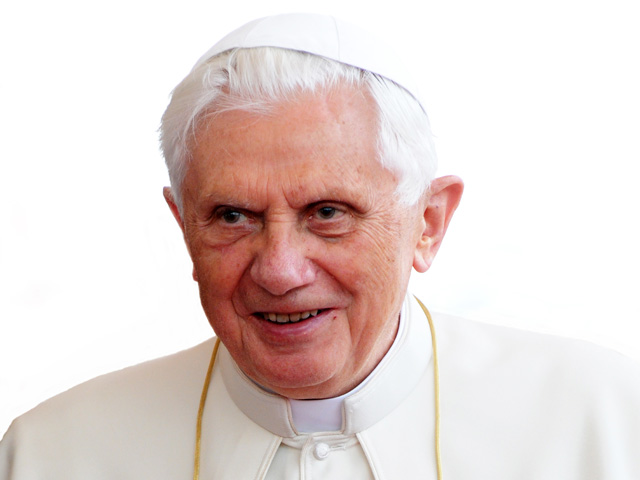 The end of Pope Benedict XVI’s pontificate, at 8pm (7pm UK time), Thursday 28 February, will be marked by the stepping down of the Pontifical Swiss Guard from the gates to the Apostolic Palace in Castel Gandolfo. At that time they will end their active duty, because their service is specifically linked to the Petrine ministry. The gates closing on these men, who swear an oath to protect the life of the Holy Roman Pontiff, will thus be the final act and lasting image of Benedict XVI’s eight year Pontificate.

But he will continue to be called His Holiness Benedict XVI, Pope Emeritus. He will continue to wear white, a simple white cassock without a cape, but he will not wear the signatory red shoes, choosing instead the brown leather shoes gifted him in Leon, Mexico last year and with which he is very happy.

Moreover his fisherman’s ring and papal seal will be destroyed as they pertain specifically to the Papal office. All of these decisions on the future of Benedict XVI once the clock strikes eight pm on Thursday were taken by the Holy Father himself, in collaboration with the camerlegno and pontifical household.

They were relayed to press by Fr. Federico Lombardi Tuesday in the now daily briefing on the final hours of this pontificate.

Fr. Lombardi also revealed that the Pope is preparing for his final public appearances through prayer and reflection. And he confirmed that the Holy Father together with his private secretaries is also sorting between documents of a more personal nature and those relating to the Petrine ministry, ahead of his move.

But ahead of his departure from the Apostolic Palace, scheduled for 5pm Thursday, he still has two great appointments one public and one private.

Fr Lombardi revealed that upwards of 50,000 tickets have been requested for Wednesday’s last general audience, which will follow the regular pattern of a catechesis and greeting in various languages. But the Press Office director also confirmed that many more pilgrims are expected to arrive without a ticket and will be able to gain access to the square.

After the general audience, the Holy Father will greet leading figures in the Clementine Hall, among others, the President of Slovakia, the captains regent of San Marino, the president of Bavaria, the Prince of Andorra.

On Thursday morning, at 11am, there will be a farewell greeting with all of the cardinals present in Rome. Thursday afternoon, the Pope will bid farewell to the pontifical household at 4.55pm, departing by car from the San Damaso courtyard.

There he will take his leave of Secretary of State officials. From there, the Pope will go to the heliport where he will be greeted by the Cardinal Dean, Angelo Sodano. Shortly after 5pm he will leave for Castel Gandolfo, where he will arrive at 5.15pm.

At 5.30pm he will make a brief appearance to greet the faithful of the Diocese of Albano from the central balcony of the Apostolic Palace.
This will be the last public appearance of Benedict XVI.

At 8pm the Vacant See begins.

The following day, 1 March, Fr Lombardi confirmed that the Cardinal Sodano will officially convoke the Cardinals to Rome. He added that as 1 March is a Friday, the general congregations will not begin on Saturday or Sunday, but “in all probability” will begin on Monday, 4 March.

The meetings which will determine the start of Conclave among other things, will be held in the New Synod Hall.

Finally Fr Lombardi confirmed that there will be daily press briefings with general information of from the Congregations for journalists following the event.