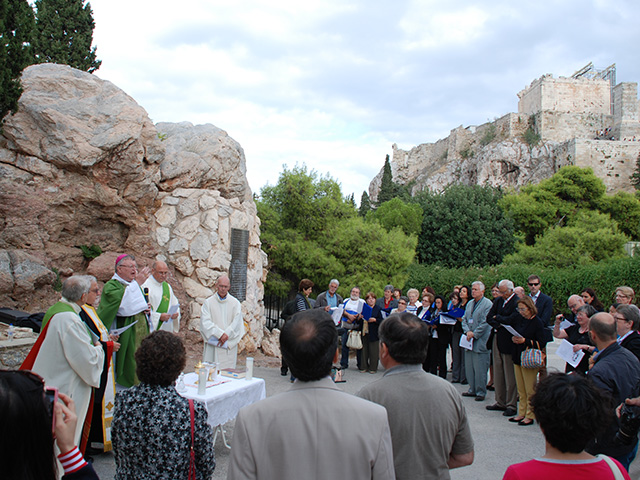 CBCEW » News and Media » » Final statement of the European Con...

The European Conference of Justice and Peace Commissions met from the 3-7 October in Athens and Corinth for their annual International Workshop and General Assembly examining the theme “Human Dignity and Economic Crisis”.

On Saturday 4 October they celebrated Mass at Areos Pagos Hill at the foot of the Acropolis, where the Apostle St Paul gave his famous sermon to the Athenians.

The Mass, the first public Mass in modern times for Catholics, was presided by Bishop William Kenney, the outgoing President of Justice and Peace Europe.

After Mass participants unfurled a banner which read: “Change life now: all and everywhere”, which was the key phrase of St Paul’s sermon.

Re-tracing the footsteps of the Apostle, on the following Sunday, the group celebrated another Mass on the site of the ancient Corinth.

Twenty-two of the 30 European Justice and Peace commissions were be represented in Athens. During the General Assembly, Archbishop Jean-Claude Hollerich from Luxemburg took over from Bishop William Kenney as President of Justice and Peace Europe.

You can download the final statement by using the link below