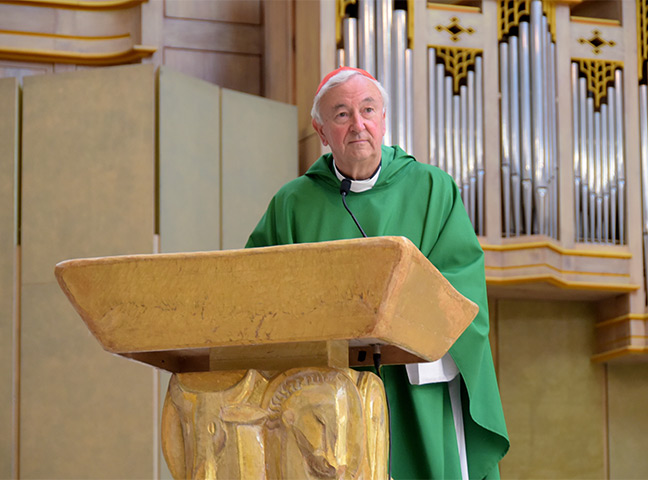 Cardinal Vincent Nichols called for a broadening of a constructive dialogue between secular authorities and communities of faith to meet today’s challenges, at a symposium on Thomas Becket at Lambeth Palace today, so our multiple and complex identities and loyalties can be brought together, rather than separated out to meet the challenges we face.

The Cardinal rejected the narrowing of a perspective towards a single test of loyalty that would serve only to betray the complexity of our human nature and impoverish the richness of the fabric of our society. Looking back to Pope Benedict’s address at Westminster Hall in 2010, he affirmed that ‘religion is not a problem for legislators to solve, but a vital contributor to national conversation,’ and for all of us “to defend those arenas of life in which true religion flourishes, open to the challenges of its’ day yet confident that its’ insights and gifts are so rooted in human reality as to possess qualities that truly endure”.

The aim of the symposium is to explore the importance of Thomas Becket, historically and today, in the week that one of his relics is being brought back to the UK from Hungary, where it had been kept at Esztergom since his martyrdom in 1170. Following services at both Westminster Cathedral and Westminster Abbey, the relics will be taken to Canterbury, the site of his murder.

Saint Thomas Becket is patron saint of both English and Hungarian parochial clergy and a reminder in his martyrdom to all Christians of their dedication to Christ rather than the prevailing powers of the state, helping us “to remember and focus on this fruitfulness of courage and faith which is always the seed of the Church”. Cardinal Nichols recognised that the relationship between Church and state is never an easy one and is always a point of tension, but “St Thomas’ martyrdom reminds us what can happen when the state seeks to dominate religious belief and reshape it to its own ends, to its own selection of values. When observance of those particular values becomes absolute requirements then we are on a path of confrontation.”

In the words of Pope Benedict, “Each generation, as it seeks to advance the common good, must ask anew: what are the requirements that governments may reasonably impose upon citizens, and how far do they extend? By appeal to what authorities can moral dilemmas be resolved. These questions take us directly to the ethical foundations of civil discourse. If the moral principles underpinning the democratic process are themselves determined by nothing more solid than social consensus, then the fragility of the process becomes all too evident – herein lies the real challenge for democracy.’

Cardinal Nichols went on to say:
“Pope Benedict went on to argue that ethical norms are accessible to right reason, and that religious faith, rather than see itself supplying those norms, can illuminate and deepen the perception and appreciation of them. He proposed a ‘corrective role’ for faith in the application of reason noting, and I quote, ‘that this corrective role is not always welcomed partly because distorted forms of religion, such as sectarianism and fundamentalism, can be seen to create serious social problems themselves. And in their turn, these distortions of religion arise when insufficient attention is given to the purifying and structuring role of reason within religion.’

“These words are surely more relevant to our situation today than they were when spoken in 2010. As we try to fashion safeguards against the threats we face it is crucial that this dialogue between secular authorities and communities of faith is strengthened and deepened. Solutions will be found only when working together, from a presumption of trust and within our traditions of mutual respect. Thankfully this is the strong tradition of our land. The challenge we now face is that of broadening the embrace of this dialogue without losing the specific Judeo-Christian sources of our strength and inspiration, sources which indeed need to be nurtured and not marginalised. Today we must be confident in this task.

Multiple and complex identities and loyalties have to be brought together, not separated out, if we are to meet the challenges we face.”

Full text of Cardinal Nichols’ address can be downloaded here: and from the top right hand corner of this page