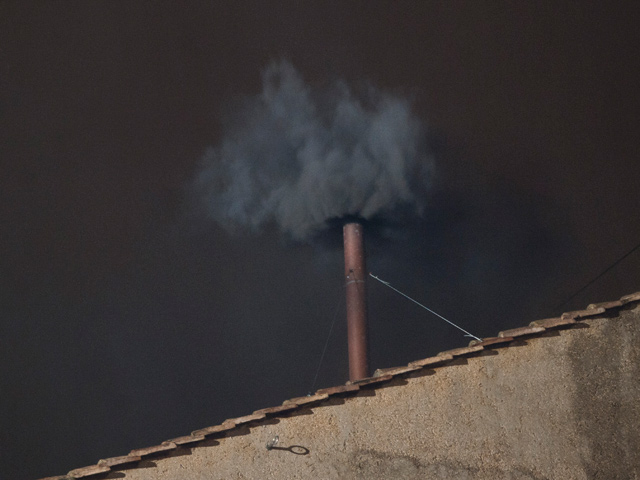 There was no doubt about the colour of the smoke that billowed out of the smokestack above the Sistine Chapel – it was black. This signaled that Cardinals meeting in day one of their conclave were unsuccessful in electing a new pope.

Out in St Peter’s square under dark and heavy clouds, hundreds had gathered with umbrellas aloft to gaze upwards at the chimney in the hopes of being among the first to catch a glimpse of the smoke: white indicating the Cardinals had chosen a Pontiff; black, confirming that they had not found sufficient consensus for any one candidate.

Bright spotlights were trained on the smokestack to illuminate the smoke against the thick backdrop of darkness and inclement weather.

The 115 Cardinal electors had entered the Sistine Chapel at about 4:30pm Rome time and opened the conclave by taking a solemn oath of fidelity and secrecy. After prayer and meditation and after the last of the non-electors had left the chapel, the senior Cardinal responsible for the proceedings, Giovanni Battista Re, asked his fellow Cardinals to proceed with the voting for the 265th Successor of Peter.

Of course, if a pope is elected in the morning’s first ballot, people can expect to see white smoke billow forth between 10.30am and 11am. The same holds true for the first afternoon ballot: should a pontiff be elected then, white smoke should be visible between 5.30pm and 6pm.

Then, the real suspense begins: who has been elected Pope? Typically, it takes about forty minutes between the time the new Pope must accept the office, change into white vestments and hear the Cardinals pledge their obedience to him before we finally hear the words, “Habemus Papam” from the central loggia of St. Peter’s basilica.