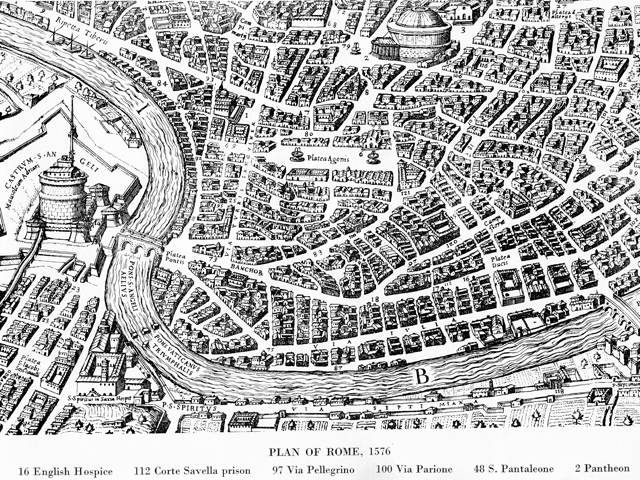 Its foundation in 1362 makes this the oldest English institution outside of England.

From 1362-1579, there was a Hospice here. In 1579, the house became a seminary for training Catholic priests; and so it has remained up to the present time.

Some 120 people are expected to Mass and lunch on Saturday 1 December. Archbishop Nichols of Westminster will be principal celebrant. Presiding in choir will be his predecessor, the Archbishop Emeritus of Westminster, Cardinal Cormac Murphy-O’Connor, Rector of the Venerabile from 1971-77. Some seven bishops are expected to concelebrate – coming from England and Wales and the Vatican. The English and Welsh bishops include Archbishop Peter Smith of Southwark and Archbishop Bernard Longley of Birmingham. Archbishops Nichols, Smith and Longley were all students of the College.

Accompanying them will be Bishops Campbell of Lancaster and Drainey of Middlesbrough. From the Vatican, the College will welcome the recently appointed Secretary of the Congregation for Divine Worship, Archbishop Arthur Roche, Emeritus Bishop of Leeds and himself a former student and staff-member; Archbishop Augustine Di Noia, Secretary of Ecclesia Dei; and Archbishop Piero Marini, President of the Pontifical Commission for International Eucharistic Congresses.

For more than two centuries, this site on the via di Monserrato, fast by the Palazzo Farnese in the heart of medieval Rome, was a Hospice for English and Welsh Pilgrims. But the English presence in Rome predates this by some five centuries. Ine (sic), King of the Saxons, built the Schola Saxonum alongside the Vatican Hill in the 8th century. When Pope Innocent III in 1201 converted this into the hospital which it remains today, English priests established themselves half a mile away at the church of San Pantaleo at the entrance to today’s Piazza Navona. So many pilgrims came to Rome for the Holy Year of 1350 that it inspired a group of Englishmen living in Rome to form themselves into the Confraternity of St Thomas of Canterbury, buying the first house in 1362. There was already an English couple living there, John and Alice Shepherd, who sold rosary beads to pilgrims visiting the medieval St Peter’s. St Bridget, living a few meters away, overlooking the Piazza Farnese, had already established a Swedish Hospice – as had the Germans in the via dell’Anima, across the Corso Vittorio Emmanuele.

The English Hospice attracted large numbers of pilgrims, including, in its early years, the mystic Margery Kempe, the future priest-hunter Thomas Cromwell, the future martyr St Henry Walpole, and later the poet John Milton. From 1412, the wall out onto the street was emblazoned with the English Royal Coat of Arms – the shield enduring to this day – for this was a house under the patronage of the Crown. The 15th century saw some of the most famous English humanists among the Hospice’s members: Thomas Linacre, William Lily, William Warham, John Giglis, Christopher Bainbridge and John Colet. In Henry VII’s reign, it was known as the “King’s Hospice”; Henry VIII described it as “Our Hospice”.

With the split between Rome and Elizabeth I, it was no longer possible to train priests at home; and so the Hospice’s use was altered to prepare young men for the “Mission to England and Wales”, i.e. to return to their home countries to support the faith of persecuted Catholics. The Venerabile achieved fame quickly for, in the first century of its existence, forty-four of its recent alumni were martyred: of these some 10 have been recognised as Saints and the majority as Blessed. In the four centuries that it has been a seminary, the Venerabile has continued to welcome pilgrims to worship and to visit, offering bed and board to bishops, priest and lay people come to Rome on Church business. The Villa Palazzola overlooking Lake Albano, purchased by Rector Hinsley in 1920 and now a retreat-house, has enabled the seminary to continue the 650-year-long tradition of accommodating countless groups from England and Wales come as pilgrims to visit the sacred sites of Rome.

Whenever students in the first century of the seminary’s existence heard that one of their number had been martyred, they would come before the church’s altarpiece, Durante Alberti’s depiction of the Most Holy Trinity with St Thomas, to sing a song of praise, the Te Deum Laudamus. This they will sing before the same picture – but with particular fervour – on Saturday 1 December 2012; for this is Martyrs’ Day, the College Feastday.

It was on 1 December 1581 that St Ralph Sherwin mounted the scaffold at Tyburn (yards from London’s Marble Arch) to become the first of the forty-four students to lay down his life for the Catholic Faith. The College will be honoured that day by the presence of Their Royal Highnesses The Duke and Duchess of Gloucester representing Her Majesty Queen Elizabeth II at this celebration marking the close of the Anniversary year.

“The presence of Royal Visitors will serve as a poignant reminder,” says the current Rector, Monsignor Nicholas Hudson, “of the significant contribution made by the Hospice to the British heritage over several centuries; and in particular of the royal patronage enjoyed by this house in Tudor times.”

Two days later, on Monday 3 December, bishops, staff and students of the College have been invited to the Apostolic Palace in the Vatican, where they will be received in Private Audience by His Holiness Pope Benedict XVI. They will bring with them to the Audience a relic of their protomartyr, St Ralph Sherwin, for the Holy Father to venerate. Pope Benedict told Roman students recently, “You live these years of training in a special closeness with the Successor of Peter, which enables you to perceive with particular clarity the size of the Universal Church: here you breathe Catholicism!”

“These words of the Holy Father seem to capture the vocation of this house these last 650 years: in its first two centuries, to bring English and Welsh Catholics to be close to Peter; then, when England and Wales rejected the Catholic Faith, to form men who would bear back to their homeland Catholic sacraments and Catholic truth – a vocation which endures to this day. I can think of no more eloquent expression of this than for the College, as a climax to this Anniversary Year, to bring to Peter’s successor the relic of our Protomartyr as a pledge of our filial devotion and esteem.”

vecrome.org
The official website for the Venerable English College in Rome