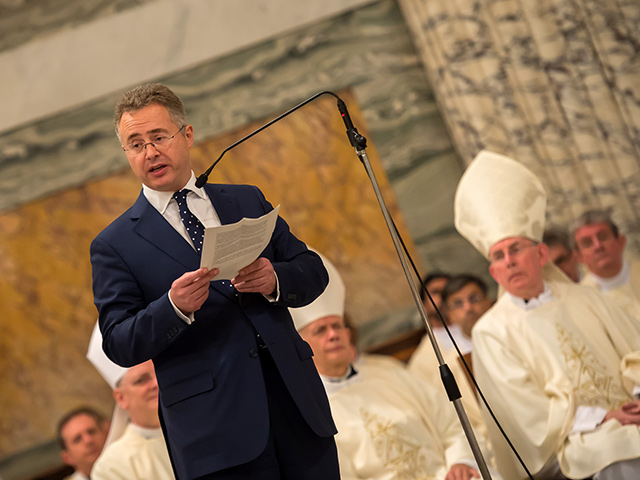 A special Mass was held last night in Rome to mark the 100th anniversary of the re-establishment of diplomatic relations between the United Kingdom and the Holy See.

Vatican Secretary of State Cardinal Pietro Parolin presided at the Mass in the Basilica of St Paul Outside the Walls.

The celebration, attended by many ecumenical guests and a high level British government delegation, comes 100 years after Sir Henry Howard was appointed to bring “the cordial congratulations of His Majesty the King on the occasion of his election” to Pope Benedict XV.

Amidst the outbreak of the First World War, the British government recognised that the Pope was “a ruler of wide influence” and the Foreign Secretary of the time, Sir Edward Grey, wanted to assure him that his government also “used every effort to maintain the peace of Europe”.

A century later, Britain and the Holy See share common concerns and value this diplomatic relationship.

The UK Ambassador to the Holy See in 2014 is His Excellency Nigel Baker. Nigel has served in the role since September 2011.

Speaking before the Mass on Wednesday, 3 December, Ambassador Baker gave us a short reflection outside the Basilica of St Paul Outside the Walls.

You can listen to the Ambassador’s reflection by using the player to the right of this page.

Vatican Radio has interviewed Secretary of State Cardinal Parolin about the anniversary. What are the common concerns between Britain and the Holy See? How important is this diplomatic relationship today? And what about those who still remain wary of Rome’s “interference” in English affairs? Philippa Hitchen puts these questions to the cardinal.

Cardinal Parolin says it’s a very important anniversary because it’s important to dialogue and have channels of communication to deal together with the problems of the world today. Asked about those who remain wary of Rome’s “interference” in English affairs, he says with a smile that there are always those who’re afraid of the power of the Church. But he quotes from the Vatican II document Gaudium et Spes which clearly speaks of the Church and State as “two autonomous entities” which cooperate together for the good of the human person…

Regarding controversial questions such as same-sex marriage legislation in Britain, the cardinal says diplomatic relations are not strained by these issues as they are simply a tool through which the two parties keep in touch. But the Holy See, he says, can express its concern about developments on moral issues and it’s important to listen to the voice of the local Church as well…

In the social sphere, the cardinal says there’s increased cooperation with governments including the UK which has shown interest in stepping up that cooperation. “We are also willing to continue and increase this cooperation” he says, particularly in areas of conflict prevention and resolution, in the defence of human rights and in the fight against poverty…

Asked about the high level of Euro-scepticism in Britain today, Cardinal Parolin says it’s not easy to convince people but the Pope’s visit to Strasbourg conveyed the simple message of the importance of the European project, which has led to 60 years of peace and development. Secondly, he notes, the Pope also wanted to bring hope and encouragement especially to the younger generations and to assure them that by resolving some points of weakness it is possible to build a united Europe…

On the possibility of another papal visit to Britain, the cardinal said the Pope has many journeys already planned, to Asia this year, to Philadelphia for the World Meeting of Families, then he is thinking about Africa, so for the moment there’s nothing fixed for Britain, though he said he hopes it may one day be possible to build on the good results of Pope Benedict’s trip to the country.