Catholic and Anglican bishops come together for joint meeting 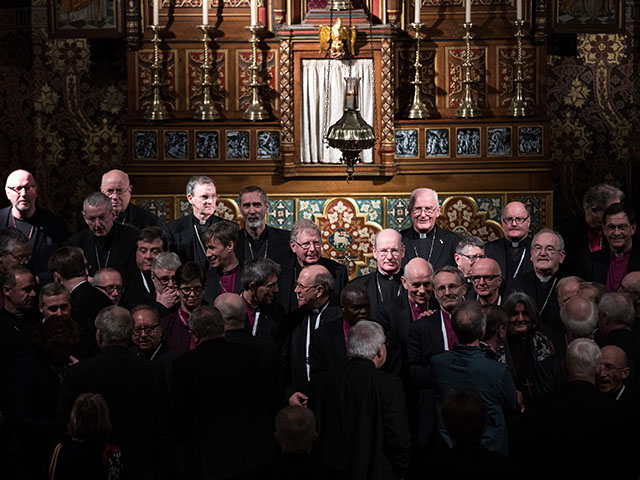 Catholic and Anglican bishops came together in Birmingham for a two-day joint meeting this week (31 January – 1 February).

This was the fifth joint meeting in the past 10 years, with previous meetings in Leeds and London.

These meetings aim to foster spiritual communion; to identify and develop programmes of joint witness and mission in this country, both regionally and nationally, while reflecting on the effectiveness of this expression of spiritual communion; to remain informed about the formal dialogue of ARCIC (Anglican-Roman Catholic Commissions).

The meeting began on Tuesday, 31 January, with midday prayer at St Chad’s Catholic Cathedral in Birmingham’s city centre. The day concluded with Evening Prayer at Oscott College with the seminary community. Morning Prayer at St Philip’s – the city’s Anglican Cathedral – took place on the second day.

The 41 Anglican bishops and 32 Catholic bishops split into regional groupings for joint discussion around the following subjects:

Reflection on the international scene with a focus on the latest developments of ARCIC led by the co-chairs of that dialogue, Archbishop Bernard Longley and Archbishop David Moxon

Reflection on Europe and the movement of peoples

Reflection on prayer and evangelisation with a brief introduction by Archbishop Welby on the ‘Thy Kingdom Come‘ initiative with a response from Cardinal Nichols as to why it is being supported ecumenically.

flickr.com/photos/catholicism
You can get a good feel for the meeting by visiting our professional photo album on Flickr.