Cardinals in “no rush” to fix a date for Conclave 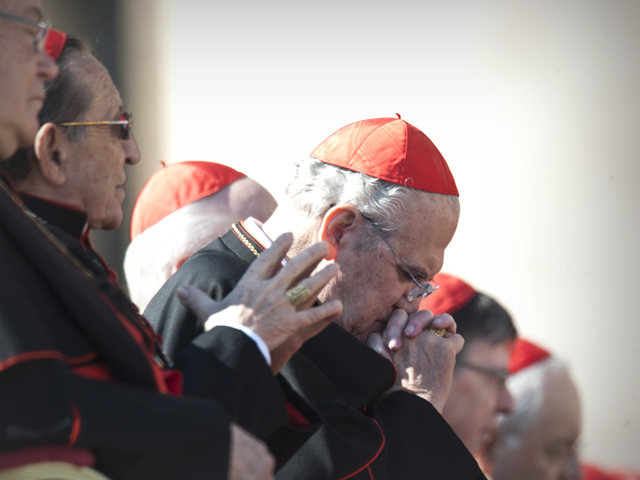 As of Tuesday morning, 5 March, 110 cardinal electors are present in Rome.

In the daily press briefing, Fr Federico Lombardi, director of the Holy See Press Office, told journlists that the cardinals are in “no rush” to fix a date for Conclave and that tomorrow Wednesday at 5pm Rome time, the Universal Church is called to prayer for the cardinal electors as they approach this monumental task.

Fr Lombardi noted there were 11 interventions Tuesday morning, by various cardinals both heads of the Roman Curia and its dicasteries and local bishops representing all five continents, expressing the universality of the Church. The cardinals, he said ‘sign up’ to make an intervention – 33 have done so thus far.

These interventions focused on Holy See activities, different dicasteries and their relations with local bishops around the world, the renewal of the Church in light of Vatican II, the New Evangelization, the Church and new cultures.

Fr Lombardi noted that another issues under discussion Tuesday morning was the Constitution governing the Vacant See and papal transition and how it was modified by the Motu Proprio. Fr Lombardi said note no. 37 was discussed and the issue of bringing forward the date of the start of Conclave remains ‘open’, no proposal has been made.

Fr Lombardi, one of the few people present during the Congregations, but not directly involved, added that he sensed that the Cardinals want to “understand how long is needed to properly prepare for such an important event without hurrying things in any way”.

He added that the fact that the Cardinals have opted not to hold afternoon sessions Tuesday and Wednesday in the general congregations is “significant” of the cardinals intention to take their time.

The general congregation also approved a moment of Universal prayer established for Wednesday afternoon at 5pm at the Altar of the Chair in St. Peter’s basilica. The liturgy will include Vespers and the adoration of the Blessed Sacrament. It will be presided by the Cardinal Dean, Angelo Sodano.

Moreover, Tuesday afternoon the Sistine Chapel closes to visitors as the Vatican workers begin to prepare it for Conclave.

On Tuesday, journalists were also treated to a sneak preview to the urns that will be used during the voting in Conclave, designed by Italian sculptor Cecco Bonanotte and commissioned by the Vatican.

4,432 journalists have thus far been accredited to cover the Conclave, added to the permanent press corps accredited to the Holy See the number of journalists covering this moment in the life of the Church now stands at over 5,000, from 66 nations in 24 different languages.