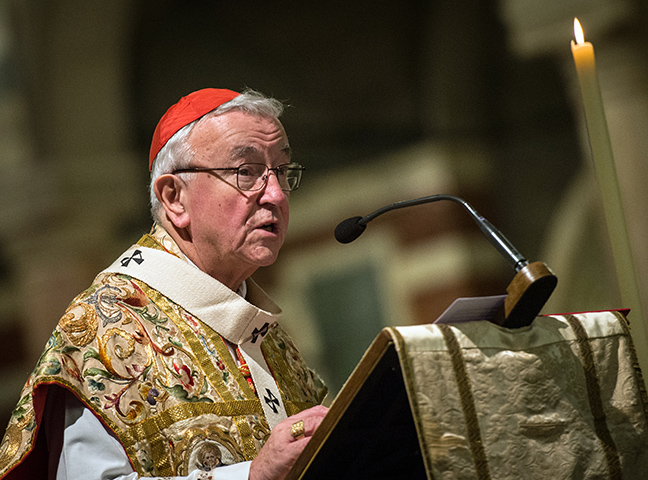 On Sunday 5 February Cardinal Vincent spoke on the BBC Radio 4 Westminster Hour about the executive order issued by President Trump which suspends the refugee acceptance programme for 120 days, prioritises refugee claims of religious-based persecution and imposes a travel ban on nations from a countries of ‘particular concern’ (seven, predominantly Muslim, countries have been named).

In the interview, the Cardinal explained that safety ‘is not secured by fear, it is secured by improving relationships…by opening up things not shutting them down.’ He also expressed concern that the executive order ‘increases the risk faced by Christian communities in the Middle East because it implicitly backs a false notion that this conflict is between Christians and Muslims. It increases the image of Christianity as a Western phenomenon.’

Reflecting on political leaders’ duty of care, Cardinal Vincent emphasised that this is ‘a question of how you exercise that duty’. The Cardinal expressed his concern that the executive order would not help.

‘Safety can never be the overall and ultimate aim, because if we try and live safely by simplifying, identifying others as our enemies, then we live in an increasingly enclosed mentality and an enclosed environment and that is not the best way for people to live.’

He went on to praise and encourage the work of the government Community Sponsorship Scheme to assist local communities welcome refugees. ‘The challenge is not only to the government, but to the communities in this country who often speak about their generosity, to really take up this opportunity. Then, I would hope, that programme can be speeded up and expanded.’

Cardinal Vincent acknowledged the difficulty in making decisions regarding acceptance of more refugees, but emphasised that ‘the intention that we play a concerted effort to solve this dramatic crisis of our time is very important because otherwise it is the extreme voices that win, whether they’re the extreme terrorist voices or the populist voices. I don’t believe that any form of leadership is best exercised by using fear.’

The full interview is available to listen to here.