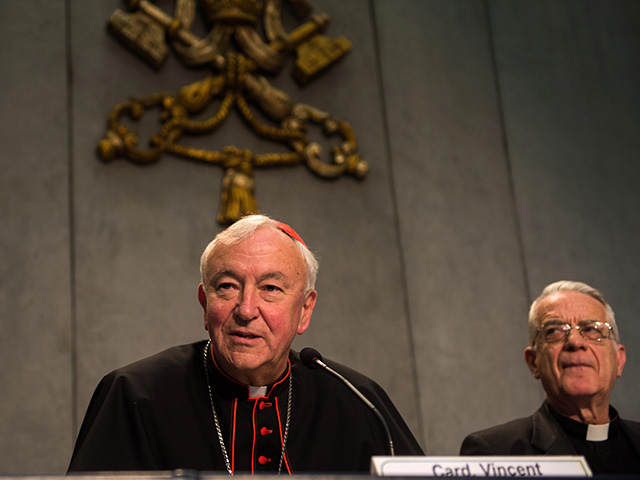 At the daily press briefing in the Vatican on Tuesday, 7 October, journalists heard how bishops meeting on the second full day of the Synod for the Family have been discussing the importance of using more inclusive language to talk about people living outside the teachings of the Church.

They’ve also been stressing the need for a ‘gradual’ or ‘stepping stones’ approach to couples, and the recognition that elements of truth also exist in those relationships which do not conform to the Church’s ideal vision of family life.

President of the Catholic Bishops’ Conference of England and Wales, Cardinal Vincent Nichols, and Lebanese Cardinal Bechara Boutros Rai also shared impressions from the Synod Hall, including the call for a special message for families being persecuted for their Christian faith Iraq.

They spoke about Synod Fathers who live in countries where Catholics are a tiny minority and who say the Church has much to learn from the wisdom and experience of other religious traditions.

Cardinal Nichols also described the very open and relaxed atmosphere of the Synod and the importance of hearing married couples share details of their relationships, including the pivotal role that sex plays in the life of most married couples:

“The Australian couple were quite explicit and developed in their thought and emphasis on the central role of sexuality and sexual intercourse in their marriage – now that’s not what we bishops talk about mostly! But to hear that as the opening contribution did open up an area which others followed and it was a recognition that it is often central to the wellbeing of a marriage.”

Cardinal Nichols pointed out it’s too early to draw any conclusions from these first sessions, yet it does seem clear that this first Synod of Francis’ pontificate is shaping up for a much more honest and down-to-earth discussion than most bishops have experienced here in the Vatican over recent decades.

You can watch an edited version of the press conference focusing on Cardinal Vincent Nichols’ answers. This is primarily for a UK/English-speaking audience. Although the opening question is in Italian, the answer – and all subsequent answers – are in English.

You may not be able to view the video on this page if you are using an iPad or iPhone. Please watch on our video channel:

Alternatively, you can watch it on our Vimeo stream here:

The Cardinal spoke to Joshua J. McElwee of The National Catholic Reporter, an independent US non-profit news organisation, about the Family Synod. Read the full interview here: