Cardinal: Much more needs to be done to help refugees in Iraq 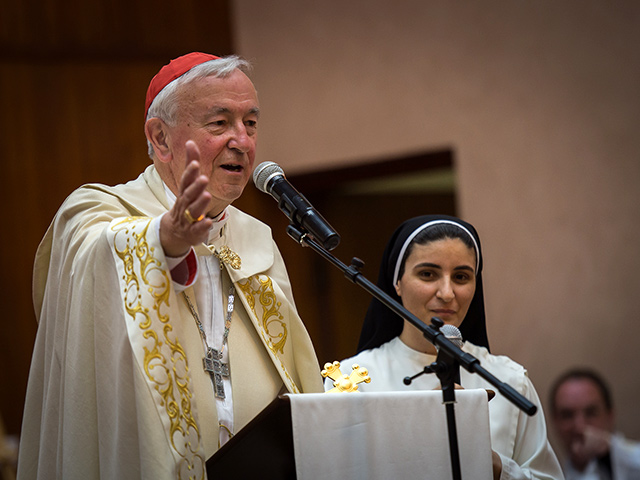 Cardinal Vincent Nichols has praised the Catholic community in Erbil, Iraq, for the ‘admirable and effective’ welcome given to thousands of people displaced by instability and fighting in the region.

The Cardinal was in the capital of Kurdistan on a two-day visit to Iraq. Erbil sits in the middle of two major conflicts – war in Syria between rebel groups and President Al-Assad’s regime, and the advance into Iraq of ISIS militia.

Cardinal Nichols gave a short homily at a Mass in the Chaldean Rite on Sunday evening in the Cathedral of St Joseph in Erbil. The Sunday was celebrated as ‘The First Sunday’ in the Chaldean calendar.

The Cardinal expressed his gratitude for the warm welcome he had received and his admiration for the courage shown by so many people who, in recent months, had lost everything except their family love and their faith.

He also thanked the Chaldean Community in Erbil for the admirable and effective welcome they had given, under the leadership of their Archbishop, to so many thousands of displaced people.

“I promise to tell your story when I get home and that the Catholic people of England and Wales will keep you all very much in their prayers.

“We know that so much more needs to be done so that you can return to your homes and lands. We pray for your perseverance and patience in these very difficult circumstances.”

The Cardinal then reflected on the character of St Thomas who, in his suffering and sorrow, had stayed away from the community of the disciples. Only when he returned did he receive the good news of the resurrection of the Lord.

“Never stay away from the community of the Church because of sadness, or anger, or distress. Always stay within the embrace of the community because there, together, you will find the love and support which so reflects the love of the Lord. There you are able to say ‘my Lord and my God’.”

Finally, the Cardinal repeated the Lord’s own greeting, ‘Peace be with you’.

“This greeting does not mean that our lives will be free from trouble. The Lord does not promise that to us. Rather this greeting is a prayer that all the blessings of God will be given to you. And this is my greeting to you all.

“Please pray for us as we will most certainly pray for you!”

Cardinal Vincent visited Christians living in makeshift camps in Erbil. Christians, Yezidis and others sought refuge from the destruction and violence caused by ISIS in their former homelands around Mosul and the Nineveh Plain. Up to 100,000 people have sought refuge in Erbil.

flickr.com/photos/catholicism
We have an excellent set of images on Flickr covering the Cardinal’s visit to Erbil, Iraq.