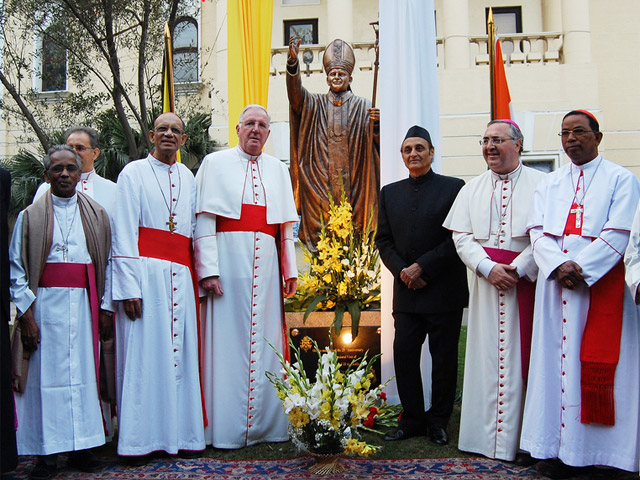 Cardinal Cormac Murphy-O’Connor has been asked by the Holy Father to serve as his official papal representative to India this February to mark the Silver Jubilee of Pope John Paul II’s Apostolic Visit to India in 1986.

On that memorable trip, Pope John Paul delivered a message of hope; concern for the poor and encouragement to the religious men and women of India.

This visit will celebrate those achievements and reflect on the long-established ties enjoyed by the UK and India. The Cardinal feels ‘very privileged’ to be asked by the Holy Father to represent him in this great country and in so doing, is also responding to an invitation made by the Indian Bishops’, on behalf of the Indian people, keen to re-live Pope John Paul II’s memorable Apostolic Pilgrimage twenty-five years on.

Cardinal Murphy-O’Connor will visit many of the areas visited by Pope John Paul II. He will celebrate Mass in the Cathedral of the Sacred Heart, Delhi; pray with the members of Mother Teresa’s Works of Charity in Calcutta and meet with the Clergy and Religious of Bombay. He will also meet with seminarians at the Goregaon Seminary. Before departing, the Cardinal will celebrate a final Mass with the Youth of India.

The Cardinal will reflect on many of the themes highlighted by Pope John Paul II. In Ranchi, he will discuss the central role that the Eucharist plays in the life of the Church, highlighting that its celebration unites the Catholic faithful of India, the UK and the worldwide Church. In Calcutta, he will speak about works of charity, drawing upon the teaching of Pope John Paul II and Pope Benedict XVI’s first Encyclical, Deus Caritas Est. In Cochin, he will preach on the central role of the Family, as the sure foundation of Catholic life in particular and society in general.

In his final Mass, the Cardinal will express his concern for, and pleasure at being with young people; a concern that was so prevalent in the long Pontificate of Pope John Paul II and in the recent visit of Pope Benedict XVI to the United Kingdom.

This is Cardinal Cormac Murphy-O’Connor’s first visit to India.

5 February
Solemn Mass in Ranchi
Address to the priests, religious, seminarians and laity of the Archdiocese of Ranchi

Unveiling and blessing of a statue of Pope John Paul II in the grounds of the Apostolic Nunciature in New Delhi.