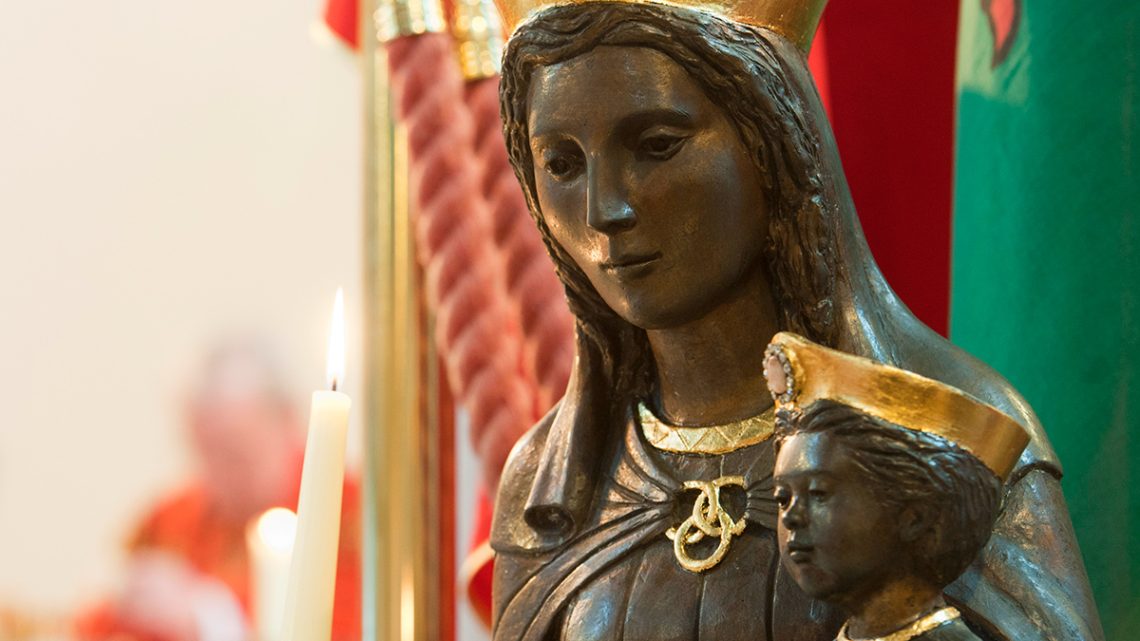 Canon Thomas, a proud Welshman, gives us a short history of the Catholic Church in Wales and talks about his favourite saints and pilgrimage sites in the country.

This interview is taken from April’s At the Foot of the Cross podcast.

Christianity in Wales is very ancient. When Christianity spread from Jerusalem, there were effectively two routes. One was the Roman Route, which was the way in which Christianity came to England in 597 with St. Augustine in Canterbury. But there was another route that went through the north of Africa and then up through Spain and through the Celtic lands, through Ireland, Scotland, and Wales was certainly part of that route and it was distinguished by a real sense of fervent preaching and distinctive monastic communities. You look at the austere monasticism of the early Welsh Church and the great Saints… so, for instance, if we take three of them, the great Saint of Wales, Dewi Sant – Saint David himself – who founded his monastery at Mynyw, people don’t really know what Mynyw means. Mynyw is the place of St David’s and Latinised it’s Menevia. And of course, we have the announcement of Bishop Mark O’Toole, who is now not only the new Archbishop-elect of Cardiff, but also the Bishop-elect of Menevia in his own person. David founded his monastery there and lived a very ascetic life, a fervent preacher of the Gospel, a lover of nature, a community that lived the true Christian values of that sort of early monasticism. It became a centre of teaching.

Two of his contemporaries, Illtyd, who founded his monastery and school at Llanilltud Fawr, or as we would call it in English Llantwit Major, and Teilo, who was Bishop of Llandaff. These are just three of the great Saints of Wales – Teilo, particularly for me because I was brought up in the Church in Wales and I was baptised in St Teilo’s Church in Caereithin in Swansea. Teilo has always been a particular devoted Saint of mine, sort of a patron in some respects. These saints engendered in the people not only the real sense of faith and beauty of our Christianity, but through their preaching and through their language and through their faith, they actually engendered the sense of peoplehood – a shared national identity. This lived on until the progression of the Roman Church effectively into the land and in some ways the unification of the Celtic and the Roman Churches, which ultimately was defined by the Synod of Whitby with the two resolutions of the singular date of Easter, for instance. But Wales has never lost its own identity as a Christian land.

There was obviously the effects of the Reformation. But when we look at Catholicism in Wales from the period of the mid/late 1600s, when the Vicars Apostolic began to work across our country, the country was divided into four. Wales was part of the Western district and later on in that period, what was interesting was that the sort of exiled monastic communities began to return. And after Catholic Emancipation in 1829, there was a re-establishment of the worshipping communities in South Wales particularly. In 1850, when the hierarchy was restored, one of the original 13 Suffragan Sees of Westminster was the Diocese of Newport and Menevia, which was created to cover the whole of the south of Wales. The north of Wales was included in the Diocese of Shrewsbury, and the Cathedral was not in Cardiff, but it was actually at Belmont Abbey, which is in Herefordshire. In fact, as it stands at the moment, the Archdiocese of Cardiff is the only diocese in Wales that has a bit of England in it because Herefordshire is also included in the Archdiocese. But that wasn’t created until 1916, when there was a restructuring with the Papal Letter Cambria Celtica and the Archdiocese of Cardiff was created and the Diocese of Menevia was then re-founded, as it were. So Wales was divided, effectively, with a diagonal line with a Cathedral up in the north in Wrexham for Menevia, and then the Archdiocese of Cardiff in the south with the Cathedral at St David’s – the Metropolitan Cathedral which still exists. And that continued until 1987, when there was a further reconstruction, where a horizontal line was sort of driven across the country between Aberystwyth and Machynlleth, and the north became the Diocese of Wrexham, and then the south was divided into Menevia in the west and Cardiff in the east of the south of Wales.

So we have three Diocese in Wales, and what’s interesting is that the Holy Father appointing Bishop O’Toole as the Archbishop of Cardiff and the Bishop of Menevia in persona episcopi means that the two dioceses remain as ecclesiastical entities but are united in the very person of the Bishop. And so he’s the Bishop of both dioceses across the south of Wales.

Over the period, there has been an increase in legislative power, and no longer is it regarded as an ‘add on’. And in fact, the Church in Wales has never really been seen as an add on to the Church in England. To be honest, the way that the Church now deals with the civic authorities in Wales is just as important as we do here in England with Westminster. The devolution process has created a very distinctive character within the Principality. You could say that Welsh-ness has come to the fore. My own family are in Wales, and we’re very proud of being Welsh. Not only that, the Senedd and the Welsh government now have really important functions.

For us in the Catholic Church, there are two which are really important. The first is that educational matters are devolved in Wales, and therefore we have to deal in the Catholic Education Service has a Welsh Officer, Angela Keller, who works in Cardiff, and she deals with Welsh issues surrounding education. One of the great differences between education in Wales and in England is that there are no Academies in Wales. So we still work on the voluntary-aided principle, which is very distinctive from the academisation process that is going on in England.

And also health matters are devolved in Wales so there’s a difference in policy on health. People who live in Wales are blessed because they don’t have to pay for prescriptions! Obviously health and the well being of people is a very important part of our Catholic teaching so the Catholic Church in Wales has a very important voice to play in those areas particularly.

Our meeting in Cardiff is not only important in the fact that we are a Bishops’ Conference of England and Wales, but it’s important to make a strong statement about Catholic life in the Principality – in Wales itself. The physical presence of our bishops being together will be integral to it. As part of our plenary work, the bishops will make a visit to the Senedd itself, down to the Millennium Centre and to the Cardiff Bay area. We will be holding a reception in Cardiff Castle for Senedd members, for the civic authorities in Wales, to basically show that we are real partners in developing not only the Catholic voice in Wales, but also in building up the whole of the society.

We will obviously be transacting our usual business. There’s a very full agenda. We’ll be looking at things that are of concern. One of the things that I think that everybody is aware of is the ongoing situation in Ukraine. Bishop Kenneth Nowakowski will be updating the bishops personally. And there will also be reports on how our Catholic communities across the country have been supporting the people of Ukraine. We’re also going to be looking at domestic poverty and the issues that are arising because of cost of living issues. Nobody can escape that fact that the cost of living is going up, and we can’t divorce ourselves from these social issues.

We demonstrated very tangibly during the pandemic how our Catholic communities support people in real need through alleviating poverty, through food banks, through other practical, real front-line resources. Can we do this more strategically, as well as petitioning government to have better policies in place for the alleviation of poverty? We’ll also be looking at the issues that have come forth from the publication of the government’s Rwanda policy and refugee issues. How do we receive, how do we welcome, how do we integrate people who are seeking safety? That’s always been part of our tradition in this country. We have always been a place where we live according to the freedom of law. And we welcome people who are escaping injustices in their own countries. So those are some of the things that we’ll be looking at. There’ll be a bit of more of an update as well on the pilgrimage of the relics of St. Bernadette that will be occurring later on in the year.

Pilgrimage, of course, is very much part of the Welsh national culture. We have great pilgrimage sites in Wales. There’s, obviously, St. David’s itself. There’s the National Shrine of Our Lady of the Taper in Cardigan and, in the north, St Winefride’s Chapel and Holy Well. But the place that I love most is St Non’s Well. St Non was the mother of David. It is part of the tradition that David was born in the middle of a thunderstorm and where he was born at St Non’s is a well. Wells are always associated with miraculous births and if you go along the coast from St. David’s, you come to this beautiful little chapel and retreat house. You can walk down to the well and I always find it a very magical place – a place of spirituality and a place of pilgrimage. So talking about St. Bernadette in Wales with the great tradition of pilgrimage, I think, is a really important thing too.

I must say, if you consider Wales in all its beauty – its beaches, its wonderful countryside – it’s a great place for rest, for relaxation, for spiritual reflection, isn’t it? It’s a beautiful country.

Absolutely. And the whole culture is beautiful. In my house I have a little thing on the wall and it says, “To be born Welsh is to be born not with a silver spoon in your mouth, but with music in your heart and poetry in your soul”. I hope that, in some way, I embody that in my own being! 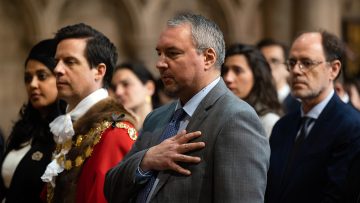