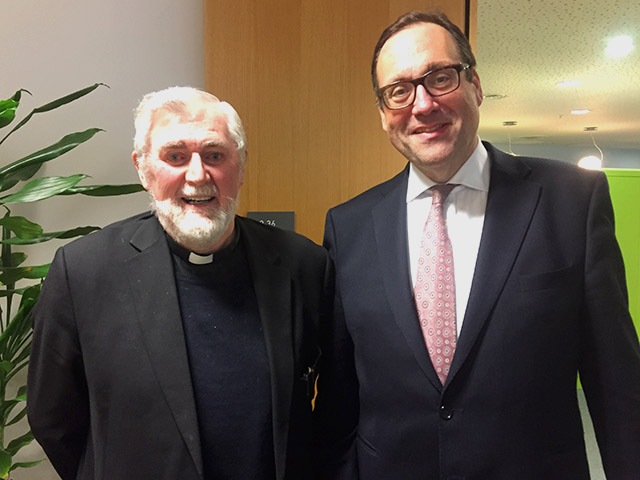 CBCEW » News and Media » » Bishop meets Minister for Syrian re...

Bishop Patrick Lynch today met with Richard Harrington MP, the Minister responsible for Syrian refugees, to reaffirm the Church’s support for efforts to accommodate people fleeing the conflict and discuss the next stages of the Government’s resettlement scheme.

“The UK has rightly taken responsibility for resettling some of the most vulnerable Syrian refugees in addition to its significant support for those sheltering in neighbouring countries. The one thousand people who have already arrived now have an opportunity to rebuild their lives in safety and security.

“I was grateful for the open and constructive conversation with Mr Harrington about some of the challenges ahead, such as making sure that no one is prevented from registering for the scheme and that everyone who arrives is properly supported as they settle into their new neighbourhoods. We also discussed the problems faced by Syrian Christian refugees and the steps being taken to include them in the scheme.

“The Minister is clearly committed to providing practical help to vulnerable refugees. The Catholic community in England and Wales also has a responsibility to provide practical assistance wherever possible and always to extend the hand of welcome. I was pleased to reassure the Minister that we will play our part.”

Last week a delegation led by Bishop Declan Lang, Clifton, visited refugees in Jordan, where over 1 million Syrians and Iraqis have sought shelter.

Bishop Lynch: We must work together to find a solution to the Refugee Crisis in Calais

catholicnews.org.uk/refugee-crisis-e-action
The government has promised to accommodate 20,000 refugees over the next five years. Follow this link to urge your MP to contact the Home Secretary to encourage her to devote sufficient resources for domestic and international resettlement mechanisms, so that as many people as possible can be accommodated within the first year and the potential of extending the government’s offer of sanctuary to others can be considered.

catholicnews.org.uk/refugee-crisis
Our web section highlighting the response to the Refugee Crisis.

catholicnews.org.uk/world-day-migrants-refugees-2016-pope
Pope Francis’ Message for the World Day of Migrants and Refugees 2016