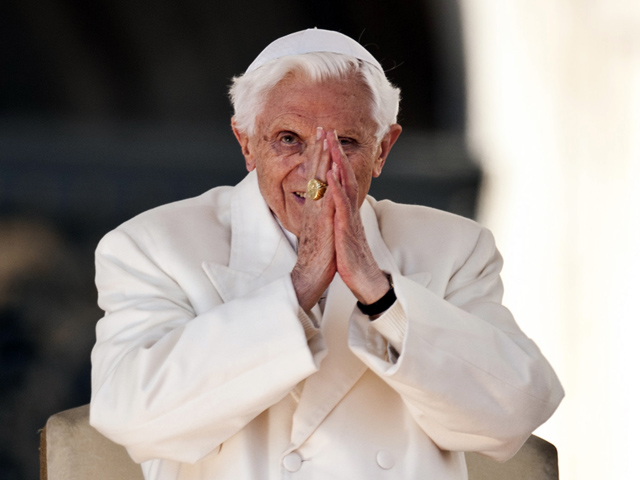 “Among you, among the College of Cardinals, there is also the future Pope, to whom, here today, I already promise my unconditional reverence and obedience.”

Those were Pope Benedict’s words on Thursday morning to his closest advisors, gathered in the Vatican’s Clementine Hall for a final greeting, just hours ahead of his retirement and the end of his pontificate at 8pm, Rome time.

For his last meeting in the Vatican, the outgoing pontiff greeted 144 cardinals individually, together with the presidents and officials of the different Vatican offices.

He also responded to a greeting from the Dean of the College of Cardinals, Angelo Sodano, saying that together they have sought to serve Christ and His Church throughout this past pontificate. He urged them all to pray so that the College of Cardinals is “like an orchestra” where diversity, as an expression of the Universal Church, always contributes to a higher sense of harmony.

The Church, Pope Benedict stressed, is a living body, as was so clearly seen through the crowds gathered in St Peter’s Square for the last Wednesday general audience. Through the Church, he said, the mystery of the Incarnation remains forever present. Christ continues to walk through all times and in all places.

Before exchanging a few words with each man individually, the Pope said he would continue to be close to them all through prayer, especially in the coming days leading up to the election of a new pope. Noting that the next leader of the Catholic Church would be among men standing in front of him, Benedict pledged his “unconditional reverence and obedience.”

As Fr Federico Lombardi noted at a press briefing following the event, Benedict will be in Castel Gandolfo so will not be part of the next papal election: thus these final words simply underline his attitude of complete service and obedience to God and to the 265th Successor of St Peter.