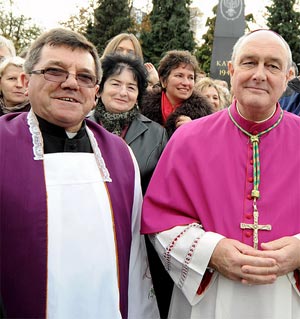 The Most Reverend Vincent Nichols, Archbishop of Westminster and President of the Bishops’ Conference of England and Wales, has expressed his sincere condolences to the Polish community in England and Wales following the plane crash in Smolensk on 10 April 2010.

In a letter to Mgr Stefan Wylężek, Rector of the Polish Catholic Mission in England and Wales, Archbishop Nichols said that he would be praying for all who died and for all the people of Poland. These included Polish religious leaders, Bishop T Ploski and Archbishop M Chodakowski and Mgr Bronislaw Gostomski, the Parish priest of the Church of St Andrew Bobola in Shepherd’s Bush.

A special Mass for those who died in the plane crash will be held at the Polish Church of St Andrew Bobola in Shepherd’s Bush on Thursday 15 April 2010 at 7.00pm.

I write to express my sincere condolences to you and to all the Polish community here in England and Wales on the terrible loss of life in the recent plane crash near Smolensk.

Not only has your country lost its distinguish and much respected President, Lech Kaczynski and his wife Maria, but so many other people who played prominent parts in the public life of Poland have also been killed. These include prominent religious leaders, too: Bishop T Ploski and Archbishop M Chodakowski.

I express my particular sorrow at the death of Mgr Bronislav Gostomski, the Parish priest of the Church of St Andrew Bobola in Shepherd’s Bush. His death brings this disaster for the entire Polish people very close to home for us all.

I would like to assure you of my prayers for all who have died and for all the people of Poland at this time of shock and grieving. May the Lord look mercifully on those whose lives in this world have ended in this tragic manner. May Mary our loving Mother encourage all those who mourn and help us to face the future with trust in Her loving Son and strengthened by the gift of the Holy Spirit.

I will offer Mass today for these intentions and assure you all of my thoughts, prayers and blessings.

With every good wish,

Pope to elevate Archbishop Arthur Roche to rank of Cardinal