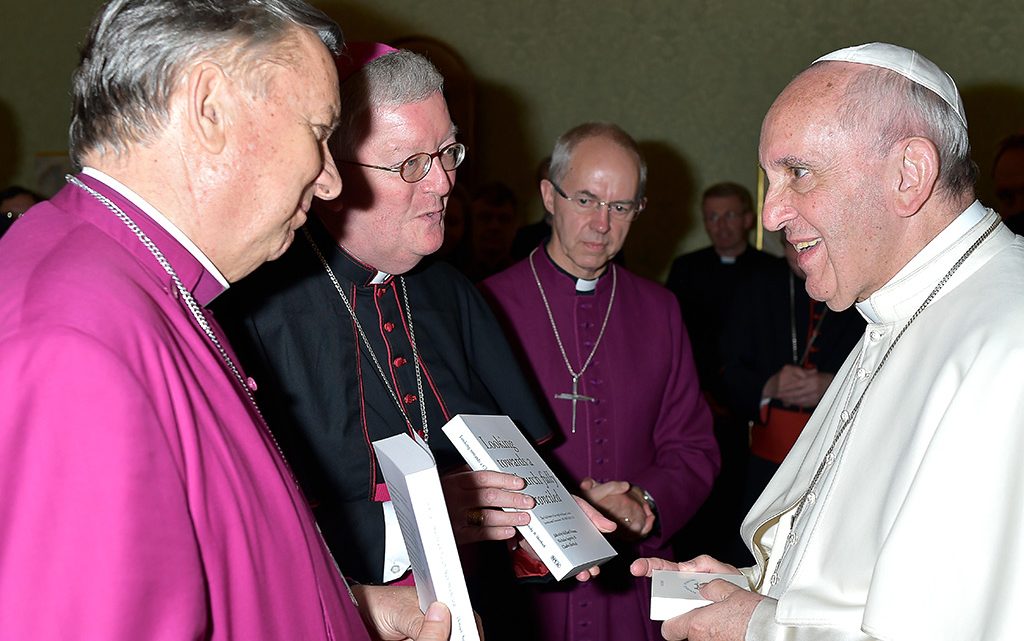 The Archbishop of Birmingham, Bernard Longley, was involved in all the events that took place over a profound and intensive two days in Rome in early October during which Catholics and Anglicans from all over the world, including a large number of Bishops, came together to mark the fiftieth anniversary of the Anglican Centre in Rome.

A service of Vespers led by Pope Francis and the Archbishop of Canterbury, Justin Welby, at the church of San Gregorio Magno al Celio;

Early morning Mass at the Altar of the Chair in St Peter’s;

Morning prayer led by Archbishop Welby at the Altar of the Tomb of St Peter;

A papal audience for the visiting Anglican Bishops in the Apostolic Palace;

Second service of Vespers with the choir of Canterbury Cathedral, at which Cardinal Pietro Parolin presided.

“The anniversary offered a wonderful opportunity for Anglicans and Roman Catholics to gather around Archbishop Justin Welby and Pope Francis in support of their recent meeting. A sequence of remarkable events took place with a symposium at the Gregorian University reflecting on the development of Anglican-Roman Catholic relations during the last fifty years.
“It was deeply moving to witness Pope Francis and Archbishop Justin commissioning nineteen pairs of Anglican and Catholic bishops to be sent to their home countries in order to foster a deeper level of communion through joint witness and outreach.

“I was particularly moved to witness the exchange of gifts: a silver Cross of Nails from Archbishop Justin to Pope Francis and a beautiful wooden replica of the crozier of Pope St Gregory the Great from the Holy Father to Archbishop Justin. I also found it very poignant that both gifts were made within the Archdiocese of Birmingham: the Cross of Nails in Coventry and the crozier in Rugby!”

The Anglican Centre in Rome opened in 1966 as a result of the historic meeting of Archbishop Michael Ramsey and Pope Paul VI during which the Pope presented the Archbishop with his papal ring. It’s a ring which all Archbishops of Canterbury have worn when visiting Rome ever since.

At the Papal audience, Archbishop Welby said to Pope Francis:

“You have recalled us afresh to the needs of ministering with the poor. You have set a Christ like example by your travel to places of suffering and difficulty. You have stood alongside migrant peoples. You have initiated work on modern slavery and human trafficking and much more. You gave essential force to the meeting of nations in Paris on climate change. Your letters and encyclicals have spoken far beyond Rome and her church, in a manner which is universal.”

Addressing the Anglican leaders as “dear brothers and sisters in Christ” Pope Francis described the gathering as “a beautiful sign of fraternity” and said that ecumenism was “never an impoverishment, but a richness”.

He said that during the past 50 years of closer relationship between Anglicans and Catholics, “the certainty has deepened that what the Spirit has sown in the other yields a common harvest.”

Pope Francis urged the gathering: “Let us never grow tired of asking the Lord together and insistently for the gift of unity.”