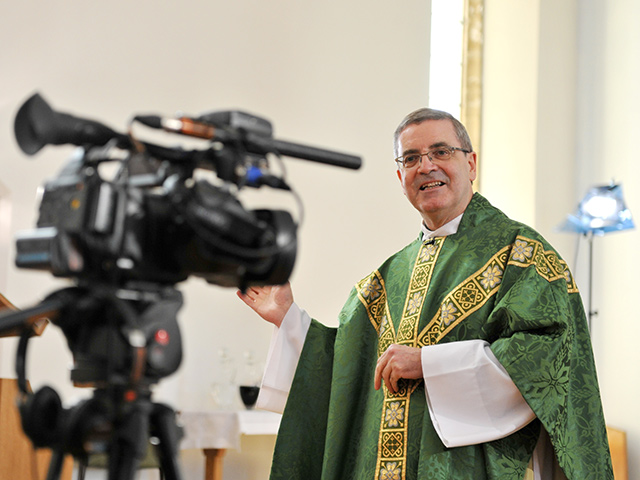 The Dean of St George’s Cathedral, Southwark, Rev Canon John O’Toole MA, AKC, Cert.Ed., has been appointed as the National Ecumenical Officer and Secretary to the Department for Dialogue and Unity at the Catholic Bishops’ Conference of England and Wales.

He replaces Mgr Robert Byrne, CO, who was made Auxiliary Bishop of Birmingham whilst serving his term of office at the Bishops’ Conference. It is fitting that news of Canon O’Toole’s appointment coincides with the fiftieth anniversary of the Second Vatican Council’s Decree on Ecumenism Unitatis Redintegratio celebrated during the Bishops’ Conference meeting on the 11 November 2014.

Archbishop Bernard Longley, the Chairman of the Department for Dialogue and Unity said:

“I am delighted that Canon John O’Toole has been appointed as the National Ecumenical Officer for the Catholic Church in England and Wales. His long experience of working with other churches and ecclesial communities as a Parish Priest, Director of the Diocesan Christian Education Centre and latterly as a Cathedral Dean qualifies him well for the work of promoting Christian Unity and interreligious dialogue. I am grateful to Archbishop Peter Smith and the Archdiocese of Southwark for releasing him for this important role.”

“I thank the Bishops for having confidence in me to take on this role. I am very happy to do so and look forward to meeting and working with my ecumenical colleagues. Most importantly, I thank my late parents. My mum taught me to respect Christians of other traditions. My dad taught me to respect people of other faiths. Together they taught me both to be true to myself and to be open to others.”

“I congratulate Canon John O’Toole on his appointment as the new Ecumenical Officer of the Bishops’ Conference of England & Wales. He will be much missed as Dean of St George’s Cathedral, Southwark, and I thank him for the great work he has done there during his term of office. His involvement in the ecumenical movement over many years means he will bring a great deal of experience to his new task in promoting and fostering ecumenical relationships on behalf of the Bishops of England and Wales.”

Born in Dublin in 1950, John O’Toole moved to Chatham, Kent with his family when he was 8 years old. He attended both Catholic and non-Catholic schools and then went to King’s College, London and gained a BA in History and an AKC (Associate of King’s College) award in theology. He then studied at St John’s Seminary, Wonersh and also at St Mary’s College, Strawberry Hill where he gained a Postgraduate Certificate in Religious Education following which he became Head of RE at Richard Challoner Secondary School, New Malden, Surrey.

In 1990 he was appointed Parish Priest of St Paul’s, Thamesmead and joined the ecumenical clergy team at the shared Church of St Paul’s as part of the Thamesmead Christian Community – a local ecumenical project involving the Church of England, Methodist, United Reformed and RC Church (1990 -1996). During this time he returned to King’s College, London and completed a part-time MA in Theology and Education. He then became a team member of the Catholic Missionary Society (1996 -1999), a national body leading parish and school missions. In 1999 he became Parish Priest of St Andrew’s, Thornton Heath (1999 – 2004) before returning to the Diocesan Catechetical Centre (by then called the Christian Education Centre) as Director (2004 – 2011).

In 2011 he was appointed to his current post as Dean of St George’s Cathedral, Southwark and became a Canon of the Cathedral Chapter. He has been a member of the English Anglican-Roman Catholic Committee (English ARC) since 2001 and is currently also its Roman Catholic Co-secretary.

Canon John O’Toole will take up his new post in January 2015.