Following a very successful gathering last year of 1000 adults engaged in Youth Ministry in England and Wales, CYMFed – the Catholic Youth Ministry Federation – will be holding its 2nd National Congress on Saturday 12th March 2011 in London. The theme is “Called to a Noble Adventure – A Vision for Youth Ministry”.

Fr Murray is a parochial vicar in the Archdiocese of Washington, DC. He has been a member of the Maryland Province of Jesuits sin 1968; having been ordained to priestly ministry in June 1979. He lectures widely in the areas of Liturgy and Culture, as well as conducting parish missions and priests’ retreats.

David Wells is Director of Formation for the RC Diocese of Plymouth where he is responsible for adult education and training. He has taught extensively in the secondary and higher education sectors. A storyteller and raconteur, David has spoken at over 300 conferences worldwide, including TV appearances in Canada and the USA. In the last ten years his main focus with schools has been to help staff enjoy and aspire to a greater sense of their own vocation and dignity. He is great advocate for Youth Ministry. David is married to Ali and they have three children.

Music at the Congress is by contemporary Catholic musicians CJM. At the heart of their music and mission is a commitment to resourcing pastoral musicians, liturgical ministers, worship leaders, teachers and catechists; engaging the skills of young people and to serve the Church through the ministry of music and liturgy.

Those present will represent work and ministry with over 100,000 young people per year, committed to a vision of vibrant Youth Ministry in the Church in England and Wales. It is indeed a Noble Adventure.

The Congress is being held at The Friends Meeting House, Euston, London. Tickets are available at £14.00 each via CYMFed’s website cymfed.org. 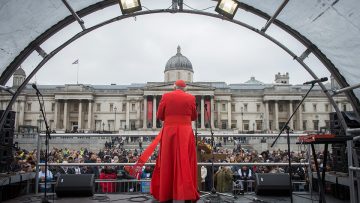