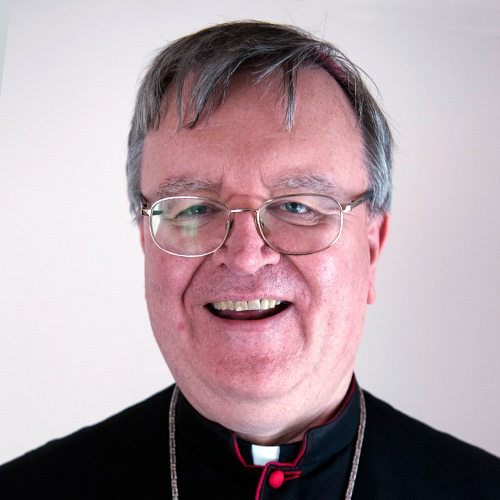 A profile of the Right Reverend William Kenney, Auxiliary Bishop Emeritus of Birmingham.

Bishop Kenney studied sociology and psychology at the universities of Växjö and Gothenburg and obtained a Fil kand (the same as a BA). He worked as a parish priest and academic sociologist within the Catholic Church in Sweden, before pursuing doctoral studies at the London School of Economics from 1977 to 1979.

He then lectured in the Sociology of Religion and was Director of Studies at the Department of Religious Studies in the University of Gothenburg between 1979 and 1982 and from 1984 to 1987. He was a General Councillor of the Passionist Congregation, resident in Rome, from 1982 to 1984.

Bishop Kenney was ordained bishop on 24 August 1987 and appointed Auxiliary Bishop and Vicar General of the diocese of Stockholm.

One of his major concerns has been to build up the Caritas organisation of the diocese. Caritas is responsible for the pastoral-social work of the Church on both a national and international basis.

In 1991 he was elected President of Caritas Europe for a four-year term.

The major part of this work concerned the problems of refugees and immigrants within Europe and the building up of the Caritas organisations in the eastern part of our continent. He was re-elected for a further four-year term in 1995. He served for three terms on the Legal Affairs Commission of Caritas Internationalis that has its headquarters in the Vatican.

In 1988 Bishop Kenney was awarded an honorary doctorate of Philosophy at the University of Gothenburg for his work in encouraging immigrant students to attend University. Besides his duties as Auxiliary Bishop in the Archdiocese of Birmingham, he lectures extensively, both in Sweden and abroad on social issues and on ecumenism and inter-religious dialogue. He is also internationally known as a retreat-leader, particularly for religious.

Through a Papal appointment in 2013, he is also co-chair of the international conversations between the Lutheran and Catholic Churches.

Bishop Kenney was elected Diocesan Administrator of the Archdiocese of Birmingham by the Cathedral Chapter. His term of office ended on the installation of Archbishop Bernard Longley, in December 2009.

He is a member of the Las Casas Advisory Board which promotes critical reflection on questions of human dignity in the light of Catholic social teaching and theology; a trustee of the Newman Trust, Oxford since 2012; a member of the diocesan Justice & Peace Commission and most recently, the Chair of the Pastoral Planning Group, which coordinates planning for the future of the Southern region of the diocese.

Bishop Kenney is the Episcopal Liaison to the National Board of Catholic Women, is part of the annual Holy Land Co-ordination pilgrimage, a member of the Department for International Affairs and has responsibility for the work in Iraq, Sudan and South Sudan.

For more, please visit the Archdiocese of Birmingham’s website.