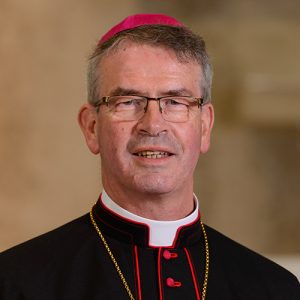 A profile of the Right Reverend Thomas Neylon, Catholic Auxiliary Bishop of Liverpool.

Born in 1958, Bishop Thomas Neylon is the oldest of three children of Irish parents who met in Warrington and were married at Sacred Heart Church in the town. His sister Mary lives in Cumbria and brother James in Newton-le-Willows.

His family lived in St Oswald’s parish, and he attended the local primary school and then English Martyrs’ Secondary School, Orford. The Bishop-elect began training for the priesthood at St Joseph’s College, Upholland at the age of 16 and then at St Cuthbert’s College, Ushaw, Durham.

On 31 May 1982, in Heaton Park, Manchester, he was ordained to the priesthood by Pope St John Paul II before a congregation of 200,000 people. Following ordination his first appointment was as assistant priest at St Cuthbert’s, Wigan and four years later in 1986 he moved to join the Team Ministry serving Skelmersdale.

In 1996 he was appointed as parish priest of St Julie’s, Eccleston, St Helens. In 2004 he took on responsibility for St Teresa’s, Devon Street and in 2018 English Martyrs, Haydock.

During his 24 years in St Helens, he also served as Dean of St Helens, was appointed as a Vicar General of the Archdiocese of Liverpool and as a member of the Chapter of Canons of the Metropolitan Cathedral of Christ the King.

In September 2020 he was appointed as Parish Priest of St Wilfrid’s, Widnes.

In his spare time Bishop Neylon enjoys spending time with his family – his sister and her husband in Cumbria and his brother and his family in Newton-le-Willows. He also enjoys walking, reading and rugby league where he supports Warrington Wolves.

He is the ninth Auxiliary Bishop of Liverpool to be appointed in the history of the archdiocese and assists Archbishop Malcolm McMahon alongside Bishop Tom Williams.