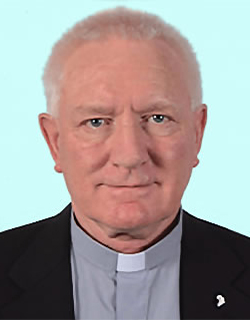 CBCEW » News and Media » » The English Bishop with a diocese t...

Pope Francis has appointed an English missionary to be bishop of a diocese that covers 2,000,000 kms2”
in Algeria. Bishop-elect John MacWilliam is originally from Wimbledon and was educated in Sussex.

He joined the British Army and saw active service in Northern Ireland and Oman before joining the Missionaries of Africa (known as the White Fathers). Now, at the age of 68 and after 25 years of service as a priest in North Africa, he will oversee the diocese of Laghouat.

Covering 90% of Algeria, the entire south of the country, this diocese has only 10% of the country’s population and a tiny Catholic population of a few hundred expatriates including some migrants:

“This is a Church in which our presence among our Muslim neighbours is a response to Christ’s call to be witnesses by our way of life,” says Bishop-elect John.

After Theology studies at the Missionary Institute, London, Fr. John was ordained a priest in 1992. He was appointed first to Rome for Arabic studies and Islamology, and then to Algeria in 1995 to re-open the community of White Fathers in Tizi-Ouzou.

Four priests had been murdered there by terrorists the year before. He later served in the Sahara and in Tunisia before being appointed Provincial Superior of the White Fathers in North Africa.

On 20 May, he will be consecrated as a bishop at Worth Abbey in Sussex, where he had been at school. Archbishop Michael Fitzgerald, formerly in charge of Interreligious Dialogue at the Vatican and himself a White Father, will be the chief consecrator and will be assisted by the Archbishop of Tunis and the Emeritus Bishop of Laghouat. Fr. Stan Lubungo, Superior General of the White Fathers will also be present.

The Right Reverend Father John Gordon MacWilliam, M. Afr. was born in Wimbledon, South London on 20 November 1948. He was a student at Worth School from 1962 to 1966. He took his Missionary Oath as a White Father in December 1991 and was ordained a priest on 4 July 1992 at Worth Abbey.

Press release on behalf of the Missionaries of Africa (White Fathers).