Synod: the Church, a place for families in crisis 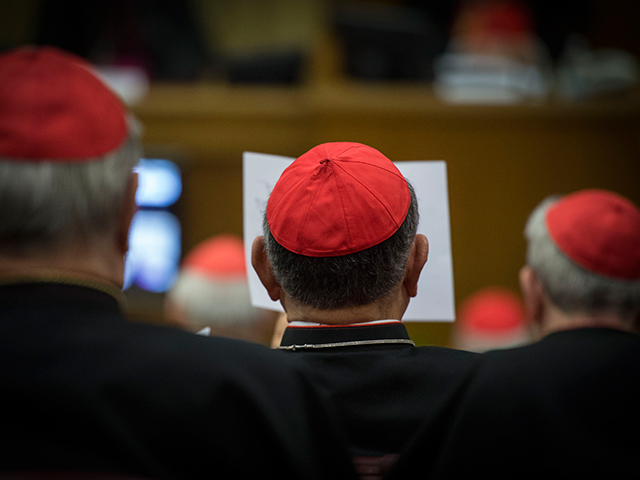 What can the Church do to accompany families in difficult pastoral situations such as the separated, divorced or divorced and remarried, single parents, teen mothers, children from broken homes? What is the Churches pastoral outreach concerning unions of persons of the same sex? These were the topics of discussion in the 8th General Congregation of the Extraordinary Synod of Bishops on ‘The pastoral challenges of the family in the context of evangelization’.

The Wednesday afternoon session was led by the President Delegate on duty, Cardinal Raymundo Damasceno Assis, Archbishop of Aparecida, Brazil. He warned against a shortsighted legalistic approach stating that the Church wants to fathom the depths of these difficult situations in order to welcome all of those involved so that it may be a paternal home where there is a place for everyone with his or her life’s difficulties.

The discussion was introduced by the testimony of auditors Stephen and Sandra Conway, from South Africa. They are regional Retrouvailles leaders for Africa, an organisation that helps marriages in crisis.

They told participants that “financial difficulties, infidelity and family of origin issues are common problems”. However they also pointed to a predominant “singles married lifestyle” which begins innocently but over time drives a wedge between the couple.

They described the hurt and long term anger they have encountered in couples who are in their second marriage and thus excluded from the Sacraments. In being excluded from the Eucharist, the Conway’s noted “they believe that they are constantly reminded and guilty of past relationships or mistakes”.

The couple also spoke of requests from same sex unions or couples to take part in their counselling course.

Testimonies from married couples have introduced each session of debate at the Synod. To date a common factor running through these presentations but which has received little or no media coverage is children. Passing on the faith to children, the effects of family breakdown on children, children from mixed marriages, abandoned children, the inability to have children.

Wednesday afternoon, the Conway’s again spoke at length about children. They emphasised that the best gift couples can give their children is to decide to love each other; to put their marriage first.

Good day. We are Stephen and Sandra Conway – the Co-Ordinators for Retrouvaille in Africa. Retrouvaille is an organisation that helps hurting couples who often attend our program as a last resort, before separation or divorce. We have been asked to share our experiences on difficult pastoral situations, in particular a) situations in families and b) concerning unions of persons of the same sex.

In 2008, after 21 years of marriage, our relationship had hit rock bottom. I went to my doctor, with no positive response. I tried talking to members of my family, who offered advice.I went to my Priest, who listened to my hurt and handed me a Retrouvaille brochure. It is now 6 years later – I am a different person because of Retrouvaille and our marriage relationship has been evangelised. The church, through Retrouvaille, became the “house of the Father, with doors wide open, a place for us with our problems”.

Our three month program begins with a live in weekend followed by 12 post sessions. We are open to any couple, regardless of their religious beliefs. Often we are approached by couples who have lived together for many years, have children but have not as yet married. Others have been married before and have a fear of making the same mistakes again. We also have couples on their second marriage, but fall into the trap of bringing the same problems from their previous marriage into the new one. The majority of couples, however, are in their first marriage but arrive at our weekend totally disillusioned and often on the verge of divorce.

What leads couples to our program? Financial difficulties, infidelity and family of origin issues are common problems which result in what we call “the singles married lifestyle”- couples married but doing things separately. Often this single married lifestyle begins innocently but over time drives a wedge between the couple and they drift apart.

Our program looks at the four stages of marriage – romance, disillusionment, misery and joy.

Most couples get stuck between the stages of disillusionment and misery. It is in the misery stage that many throw in the towel. It is our aim to equip couples with tools & techniques to get to the joy stage of marriage – where the emphasis is on US as opposed to the ME or I attitude found in the single married lifestyle. We explain that love is a decision, not a feeling; as is trust and forgiveness. We also encourage forgiveness setting the hurt party free. We use the Parable of the Prodigal Son to show that just as the Father forgave his Son, we too can forgive ourselves and each other the hurts of the past – we can come back to the Father’s house – the church and our homes. We can be the forgiving Father, by making the decision to forgive. We can also be the forgiven Son, by receiving forgiveness offered by our hurting spouse.

Children are greatly affected by an unhappy marriage. We have a few teachers on our team – they often share on the pain and hurt shown in the children of separated, divorced or unhappy marriages. We emphasise that the best gift couples can give their children is to decide to love each other; to put their marriage first; and to stand united in all decision involving the children. It inspires us when we receive letters from children, after their parents have completed our program, and thank us for their new Mom and Dad.

We have come across couples who are remarried and feel lost or aggrieved because they are unable to partake in the Eucharist. One example is that of a couple who married outside of the Catholic Church. The wife was non-Catholic and joined the RCIA to convert. As this was her second marriage, she had to apply to have her first marriage annulled. She became disillusioned with the Church and both husband and wife left the parish, after being in RCIA for 2 years and not being able to have the marriage annulled.

If God is the ultimate forgiver and full of compassion then these couples should be forgiven for previous mistakes, however, they believe that they are constantly reminded and guilty of these past relationships or mistakes by not being able to partake in communion. We have also had requests from same sex unions or couples to attend Retrouvaille. We do chat to these couples and try to show understanding and compassion to them. However, we explain that our program is presented by teams of husbands and wives and that our stories and experiences would not relate to those in a same sex marriage or union. We also have a list of professional counsellors who offer their services to same sex unions and we pass this information on.

Retrouvaille has served the citizens of Durban, South Africa for 15 years, and communities round the world for 35 years. Approximately 10 000 couples attend our programs internationally every year, about 90% of these managing to turn away from divorce, some at the last opportunity.

Thank you for your time.