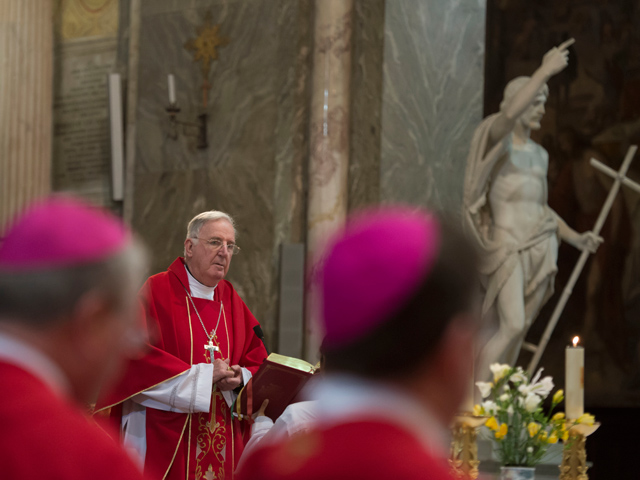 Cardinal Cormac Murphy-O’Connor has celebrated Mass in his titular church of Santa Maria Sopra Minerva on the eve of the Consistory which will make his successor as Archbishop of Westminster, Vincent Nichols a Cardinal. Special prayers were said for the new Cardinal at the Mass.

He said that it is “the first time that there have been two Cardinals in England since Blessed John Henry Newman and Cardinal Manning both held that office.”

He also spoke of the beauty of his titular church – famous for the tomb of St Catherine of Siena, Co-Patroness of Europe – a fearless woman who, according to John Paul II “dived into the thick of the ecclesiastical and social issues of her time (the 14th century)”.

She was a woman who told the Pope to “go back to Rome” and “told the cardinals, too, to be silent no longer, urging them to be brave and speak out in the name of peace.”

Cardinal-Designate Vincent Nichols will be appointed titular bishop to a Roman church at tomorrow’s Consistory and will also receive his red biretta.

“We also pray for Pope Francis, as he carries the Cross as Jesus did, that he will continue to inspire Christ’s faithful people with the joy of the Gospel.”

For more information about the Consistory visit our full section:

You can download Cardinal Cormac Murphy-O’Connor’s homily by using the link in the top right-hand corner of this article.