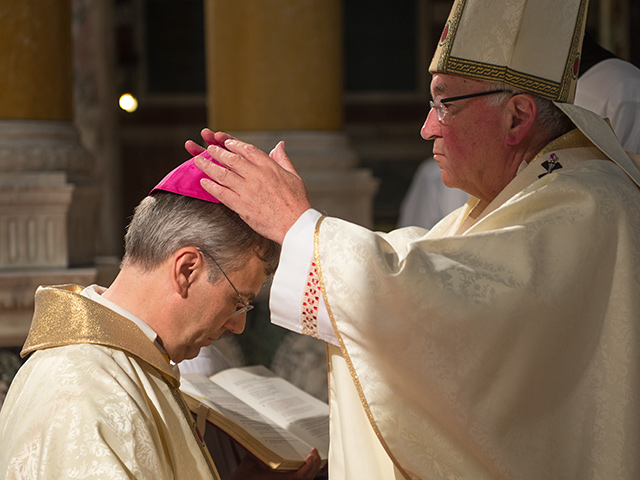 The Right Reverend Nicholas Gilbert Erskine Hudson was ordained Auxiliary Bishop of Westminster today, 4 June 2014, at the Metropolitan Cathedral of the Most Precious Blood, Westminster. He has been assigned the titular see of St Germans.

His Eminence Cardinal Vincent Nichols was the Main Celebrant and Principal Ordaining Officer. The ordination was attended by His Eminence, Cardinal Cormac Murphy-O’Connor; the Most Reverend Peter Smith, Archbishop of Southwark; the Most Reverend Michael Bowen, Emeritus Archbishop of Southwark; the Most Reverend Arthur Roche, Secretary of the Congregation for Divine Worship and the Discipline of the Sacraments; Monsignor Vincent Brady, representing the Apostolic Nuncio; as well as 25 bishops from across England and Wales; two abbots and over 180 priests.

Ecumenical guests included the former Archbishop of Canterbury, the Most Reverend and Right Honourable Baron Rowan Williams of Oystermouth.

In his homily, Cardinal Vincent referred to “the anointing from which Jesus takes his title as ‘the Christ’, ‘the Anointed One’, a reality of grace in which we are invited to share.”

He spoke about the anointing with chrism at baptism, confirmation and the ordination of priests before continuing, “Today, Mgr Nicholas Hudson will be anointed with chrism on the crown of his head, a sign through which the grace and character of episcopal ordination is conferred upon him by the power of the Holy Spirit.”

Addressing the new Bishop directly, Cardinal Vincent went on to say, “Through this anointing, the bishop, you, Nicholas, are now bound so closely to Christ, the Bridegroom, that you look on the Church, on us all, with the eyes and the love of Christ himself. With this anointing you change posts, as it were, now standing with the Bridegroom. That is why we see in the bishop a special presence of our beloved Lord.”

Recalling the Lord’s question to St Peter, “Peter, do you love me more than these?”, the Cardinal spoke about it as ‘a question addressed not in order to elicit precedence or privilege or any cause for boasting, but simply the measure of the service that Peter is going to give.

“It is an unmistakable sign that discipleship is costly. We may like to think that we have chosen to follow the Lord, to enthrone him as our Master. But in fact he has chosen us, and he will do with us just whatever he wants, for the sake of his kingdom.”

Cardinal Vincent finished with these words of welcome, “You are here for the sake of his kingdom and in receiving you as his gift we know that we need you, your goodness, your experience, your clarity of mind but most of all your love of the Lord.”

As is customary, at the end of Mass, Cardinal Vincent led Bishop Nicholas through the Cathedral so he could confer a blessing on all who had come to join him in the celebration.

Bishop Hudson will have responsibility for the pastoral care of Central and East London, consisting of the Deaneries of Camden, Hackney, Islington, Marylebone, Tower Hamlets and Westminster. He will also have oversight of the Agency for Evangelisation.

Following studies at the Venerable English College, Rome, where he obtained a Licence in Fundamental Theology, Bishop Hudson was ordained a priest for the Archdiocese of Southwark in 1986 by Archbishop Michael Bowen in the Church of the Sacred Heart, Wimbledon. He served as assistant priest in St Thomas of Canterbury in Canterbury for his first appointment.

Following further studies at the Catholic University of Leuven in Religious Education and Catechesis, he was appointed Director of the Southwark Christian Education Centre in 1992.

In 2000 he was appointed Vice-Rector and in 2004 Rector of the Venerable English College, Rome, where he served until 2013.

Immediately prior to his ordination as Bishop, he was parish priest of Sacred Heart in Wimbledon, the parish where he was baptised and later ordained.

You can download Cardinal Vincent Nichols’ homily by using the link in the top right-hand corner of this article.