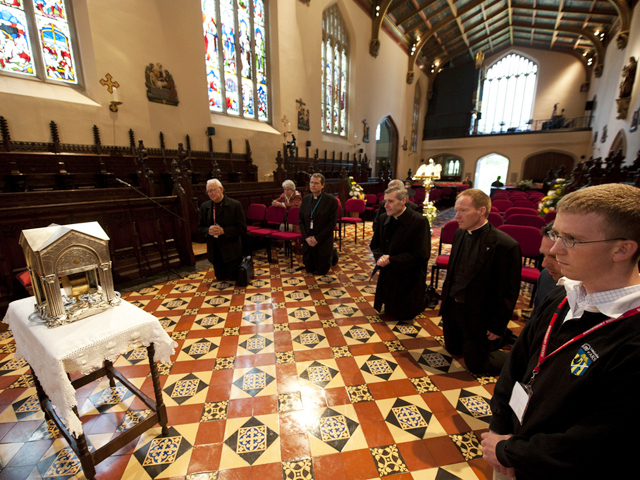 The relic of the Heart of St John Vianney was placed in the front of the altar in the chapel at St Mary’s College, Oscott, just a short distance from the pulpit where Blessed John Henry Newman preached his famous sermon “The Second Spring”, on 13 July 1852.

St John Vianney (1786-1859) is the Patron Saint of Parish Priests throughout the world. Blessed John Henry Newman, a holy Parish Priest, lived for much of his Catholic at his Oratory in Edgbaston where he devoted himself tirelessly to care for some of the poorest people in Birmingham and beyond until his death on 11 August 1890, aged 89.

The relic of the Heart St John Vianney, known as the Curé d’Ars, had arrived on Saturday, evening, 7 July, in time for the Candlelight Procession of the Blessed Sacrament and Benediction, for discerners at Invocation 2012, the Third Youth International Discernment Festival.

Blessed John Henry Newman (1801-1890), then Father Newman, gave his inspirational sermon to the assembled bishops, during the First Synod of Westminster, almost 160 years ago to the day, from the magnificent pulpit in the chapel of St Mary’s College Oscott, situated on the northern outskirts of Birmingham.

Sitting near to this pulpit Pope Benedict XVI addressed the Bishops of England, Scotland and Wales, a few hours after he had beatified Blessed John Henry Newman, at Cofton Park, Birmingham, on Sunday, 19 September 2010, the last day of his history four-day State Visit.

The Most Reverend Vincent Nichols, Archbishop of Westminster, and President of the Catholic Bishops’ Conference of England and Wales, was the principal celebrant at the Closing Mass of “Invocation 2012” on Sunday, 8 July. His Excellency, Archbishop Antonio Mennini, the Apostolic Nuncio to Great Britain preached.

The Most Reverend Bernard Longley, Archbishop of Birmingham, the Right Reverend Mark Davies Bishop of Shrewsbury, and the Right Reverend Bishop Guy Bagnard of Belley-Ars, concelebrated the Mass together with more than 40 priests, including Mgr Mark Crisp, Rector of Oscott College and member of the seminary staff.

During his homily the Apostolic Nuncio said:

“St John Vianney was certainly not a success as a seminarian. As a priest he was given the least important parish in the diocese because he was no highly regarded, and yet by his own personal holiness of life he made Ars a centre of pilgrimage and a place where God’s love, especially in an through the Sacrament of Reconciliation was revealed anew.”

“Perhaps we all need reminding that all that we have life and love, our vocation everything, is God’s gift so our debt to his is limitless, but so too is his generosity.”

It was a deeply prayerful and moving occasion in the life of St Mary’s College Oscott, the Archdiocese of Birmingham, the visiting vocations directors, clergy and members of the various religious orders and communities present. Most of all it was an inspirational and unforgettable moment for he more than 350 young discerners who came from dioceses throughput England and Wales.

Mgr Mark Crisp ended his thanks you to all the organisations that had helped to make Invocation 2012 such a success with these words to the young discerners: “Have courage. It’s a wonderful journey you are starting.”
During the afternoon there was a three hour opportunity for public veneration of the relic of St John Vianney in the College Chapel, at the end of its four-day first visit to Britain.

Despite various major sporting attractions on television – including the Men’s Singles Final at Wimbledon – several hundred people together with their parish priests came from parishes throughout the Archdiocese of Birmingham to prayer in silence before the relic of a great French saint.