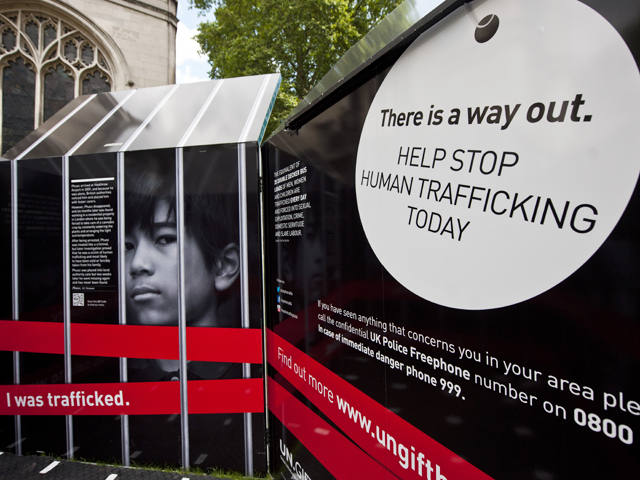 Christians from across the globe are using a novel way to draw attention to British and foreign tourists of the tragedy and universality of human trafficking.  STOP THE TRAFFIK and UN.GIFT, the United Nations Global Initiative to Fight Human Trafficking, have come up with the GIFT box project which seeks, like human trafficking, to entice people towards something beautiful only to find that once engaged the outcome is far from what was originally expected.

Five GIFT boxes are presently in circulation, each one measuring 3 metres by 3 metres and decoratively presented as huge gifts. 3 will remain static throughout the Olympic Games at Westminster Abbey, Southwark Cathedral and St Paul’s Cathedral, while 2 others will move to different locations around the capital for a number of days so as to reach as wide an audience as possible.

2 years ago, the umbrella Christian charity, More Than Gold, made human trafficking one of its primary social concerns around the Olympics. It saw the Games as an opportunity to educate thousands of Britons and hundreds of thousands of foreigners visiting London for the Games about the types and magnitude of human trafficking in the hope that, having been enlightened, visitors in turn would return home and educate others.

James Parker, Catholic Executive Coordinator for the 2012 Games and Chair of More Than Gold’s 5 Social Justice programmes, said of the project:

“The world’s Media is presently covered with images of athletes whose talents and bodies have received immense care, support and specialised attention. The Christian community would be failing the Games as a whole, and failing the global family we seek to celebrate and draw together, if we did not draw serious attention to the plight of thousands of people whose talents and bodies are objectified and trafficked across the globe. This is not, as some might believe, someone else’s problem. It is everyone’s problem. The GIFT boxes are an urgent and necessary first step to understanding this modern-day slavery.”

Many of the volunteers staffing the boxes are themselves young Catholics. Catherine, 19, a GIFT box volunteer from London, said:

“People come out of the box quite shocked. They don’t think trafficking is happening in the West but presume it to be a third-world problem. We are collecting over a 100 signatures a day at the one box I help to staff from people who want to take action to create a world free of human trafficking.”

“So many visitors don’t realise that trafficking is even happening, and those who do are surprised to find out the scale of the problem. No one seems to know about this, and they just don’t realise that it is happening in just about every locality. Hopefully, these boxes are a step in the right direction to educating an entire generation about this horror.”

For more info about the UN.GIFT Box:

For more info about More Than Gold’s Social Justice work:

Earlier this year, the Bishops’ Conference and the Vatican’s Justice and Peace office hosted a conference on combating human trafficking. The day focused on prevention, pastoral support and rehabilitation and saw a victim of trafficking share her story with delegates. The conference offered a wide variety of expert speakers and delegates came from all over the world. Read more here