As the Church gears up to celebrate the 2nd World Day for Grandparents and the Elderly on 24 July, Pope Francis is calling on Catholics to pray throughout the month for the elderly.

His July prayer request comes on the heels of last month’s intention for families, and was accompanied by The Pope Video.

“We cannot speak about family without talking about the importance of the elderly among us,” said the Pope in the video, tying the two prayer intentions together.

He noted that never before in human history have there been so many elderly people, saying “we don’t quite know how to live this new stage of life: there are many plans for assistance for the old age, but few projects for existence.”

Pope Francis reflected on the need the elderly have for special care and the gifts they can offer younger generations.

“We elderly people often have a special sensitivity for care, for reflection, and affection. We are, or we can become, teachers of tenderness.”

He added that our war-filled world greatly requires “a true revolution of tenderness”, saying the elderly can help take the hard edge off society.

‘Wisdom of a people’

The Pope also reminded everyone that grandparents and the elderly must be celebrated, especially on the World Day dedicated to them.

“Let us remember,” he said, “grandparents and the elderly are the bread that nourishes our lives; they are the hidden wisdom of a people.”

In conclusion, Pope Francis urged all Catholics to pray for those living through old age.

“Let us pray for the elderly, that they may become teachers of tenderness so that their experience and wisdom may help young people to look towards the future with hope and responsibility.”

The Pope’s Worldwide Prayer Network offered some additional information on the elderly in a press statement accompanying his prayer intention.

“In recent decades, the number of persons over the age of 65 has grown unceasingly,” it reads. “This phenomenon of population aging particularly affects the most developed countries, where 25% of the elderly live alone.”

This month’s video was produced in collaboration with the Dicastery for Laity, Family and Life and the Alberto Sordi Foundation.

Cardinal Kevin Farrell, prefect of the Vatican Dicastery, said Pope Francis is inviting everyone to become aware of the “relevance of the elderly in the life of society and of our communities” in a regular, systematic way through pastoral outreach.

“Beyond reaffirming the importance of fighting the throwaway culture,” he said, “the Pope also seems to want to offer reference points for those who are experiencing the bewilderment of finding themselves getting along in years.”

The World Day for Grandparents and the Elderly, said the Cardinal, is meant to convey the Church’s nearness to, and care for, the elderly. 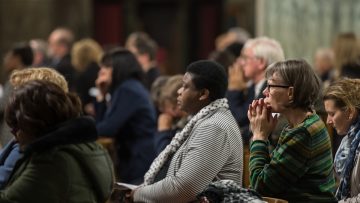