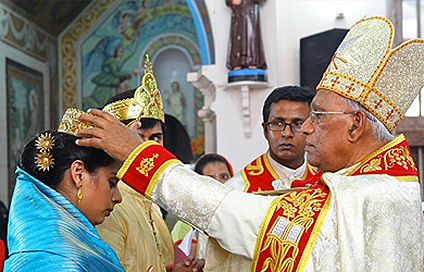 Pope Francis has today, 28 July, erected an Eparchy for the Syro-Malabar community in Great Britain.

The first Eparchial Bishop will be Father Joseph Srampickal, a priest of the Eparchy of Palai in India. Currently, Fr Srampickal is the Vice-rector of the Propaganda Fidei College in Rome.

The Cathedral for the Eparchy will be the Church of St Ignatius, Preston, which the Diocese of Lancaster made available to the Syro-Malabar community’s exclusive use in 2015 with the creation of the Personal Parish of Saint Alphonsa.

More than 38,000 Syro-Malabar faithful, who have emigrated from India over the past 30 years, now reside in England, Scotland and Wales.

They are present in twenty-seven dioceses, concentrated mainly in the big cities: London, Birmingham and Liverpool.

There are 23 Syro-Malabar priests engaged in pastoral care, coordinated by Dr. Thomas Parayadiyil, MST. In addition to the liturgical celebrations, training programs have been established in the faith according to the Syro Malabar tradition.

“One of the most enriching aspects of our Catholic life is the diversity of expressions of our faith. This has become more and more apparent over recent years with many people from around the world making their home in our countries. The new Eparchy will be a true blessing to all of the faithful in our parishes and schools from the Syro-Malabar community; many of our churches are blessed with the presence of so many families from Kerala that this generous gift of the Holy Father will serve to strengthen relations between us.”

Bishop Michael Campbell, Bishop of Lancaster, in whose diocese the new Syro-Malabar Cathedral will be, said:

“In 2015, when the St Thomas Catholic community (Syro-Malabar community) took possession of St Ignatius, Preston, in our diocese, there was great joy. St Ignatius is a fine church and will be a most suitable Cathedral for the Eparchy. The strength of the Syro-Malabar community lies in their strong faith and family life and I hope that this creative initiative by the Pope will reinforce their commitment to the faith and the life they lead in witnessing to the Gospel.”

Msgr Joseph (Benny Mathew) Srampickal was born on May 30, 1967 in Poovarany, in the Eparchy of Palai.

He entered the minor seminary and he studied philosophy at St Thomas Apostolic Seminary, Vadavathoor, and theology at the Pontifical Urbaniana University in Rome, where he obtained a licentiate in biblical theology. He continued his studies at Oxford (England). He speaks Malayalam, English, Italian and German.

Ordained a priest on 12 August 2000, he has held the following positions: Professor at the minor seminary and Ephrem Formation Centre of Pala; Director of the Mar Sleeva Nursing College, Cherpumkal; Director of the Evangelization Programme; Secretary of the Bishop; Pastor at Urulikunnam. From 2013 he has been Vice Rector of the Pontifical Urbaniana College of the Propaganda Fide, Rome.

lancasterdiocese.org.uk
More information on the Syro-Malabar Church and its origins can be found on the official website for the Diocese of Lancaster.