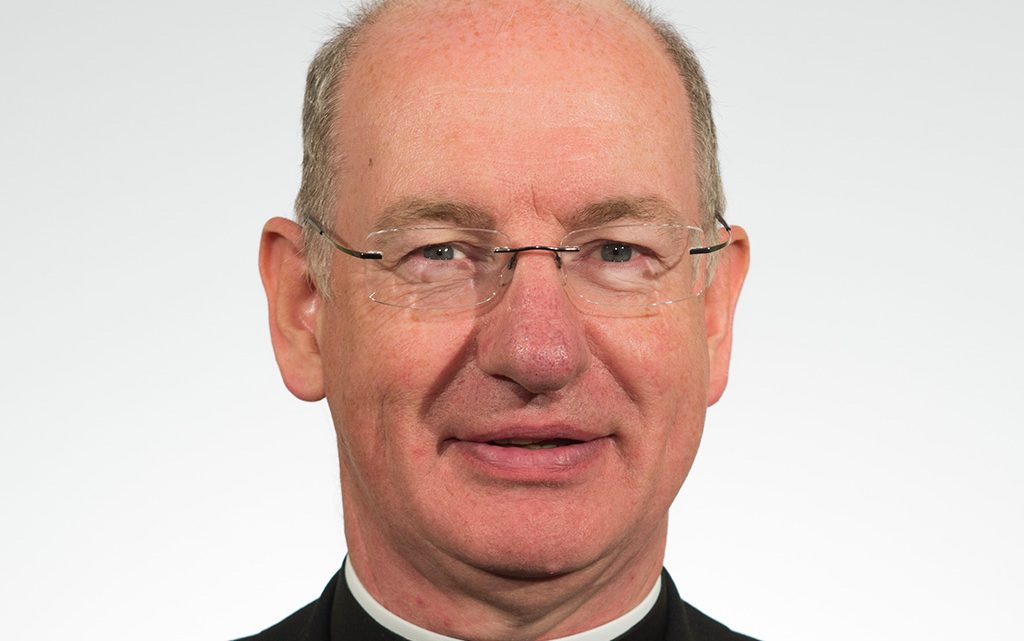 In addition to his role as Bishop of the Forces, he is Chair of Governors at St Mary’s University, Twickenham, Liaison Bishop for Prisons, Episcopal Advisor to the National Catholic Scout Fellowship and holds a brief on Mental Health on behalf of the Bishops’ Conference of England and Wales.

“It is a great privilege to have been appointed by Pope Francis as the new Bishop of Arundel and Brighton and I am very conscious of the trust that has been placed in me. In these last fifty years since the foundation of the Diocese, so much has been done to build up the Church and in the proclamation of the Gospel and, with God’s help, I look to guide and serve the Diocese to that same end.“

Bishop Richard will be leaving his role as Bishop of the Forces and he said to them:

“It has been wonderful, over these past five and half years, to work with the chaplains and so many people from the Armed Forces community and all those who serve as members of the Royal Navy, the Army and the Royal Air Force will always have a special place in my thoughts and prayers.”

Finally he turned to his new Diocese and addressing everyone he said: “I ask for the prayers of the People and Clergy of the Diocese of Arundel and Brighton as I prepare for the years that lie ahead that together we be open to the promptings of the Holy Spirit in the service of Christ and his Church.”

Bishop Richard will be installed at Arundel Cathedral as the new Bishop of Arundel and Brighton on Thursday 28 May 2015 on the 50th Anniversary of the foundation of the Diocese – 28 May 1965. He will then preside at the Jubilee Mass of Thanksgiving for the Diocese at the Amex Stadium in Brighton on Sunday 5 July.

Archbishop Peter said of his appointment:

“I was so pleased when I heard the news that he had accepted the appointment from the Holy Father. I have known Bishop Richard for many years, firstly when I taught him as a student at St John’s Seminary, then as a fellow priest of the Archdiocese and most recently as a brother bishop. I know that he will work tirelessly to serve all the people of the diocese, and I have no doubt that he will prove to be a true pastor to the Clergy, Religious and People of the Diocese.”

The Diocese comprises the counties of West and East Sussex, Surrey outside of the Greater London Borough, and the City of Brighton & Hove. It is one of 22 Roman Catholic Dioceses in England and Wales.

The Diocese has a weekly Mass attendance of 40,334 persons. There are 83 parishes some with several churches where Mass is celebrated regularly. Currently the Diocese has 136 diocesan and 97 religious priests, as well as 48 permanent deacons. We have 5 students currently training for the priesthood and 5 for the diaconate. There are a large number of Religious Orders, both men and women, living and working in the Diocese in a number of apostolates. The Diocese has a total of 83 Catholic schools.

Bishop Richard was born in Chingola, Zambia on 1958. He was brought up in Kent and, after leaving The Judd School, Tonbridge, began formation at St. John’s Seminary, Wonersh. He was ordained Priest 3 June 1982.

He served as Private Secretary to Archbishop Michael Bowen from 1992 until 2001, during which time he was also President of the Interdiocesan Tribunal of Second Instance of Southwark and Vocations Director. In 2001 he was appointed Vicar General and Chancellor of the Diocese.

In addition to his role as Bishop of the Armed Forces, he is Chair of Governors at St. Mary’s University, Twickenham, Liaison Bishop for Prisons, Episcopal Advisor to the National Catholic Scout Fellowship and holds a brief on Mental Health on behalf of the Bishops’ Conference of England and Wales.

Bishop Richard has been a Benedictine Oblate for over 30 years and is a member of the Equestrian Order of the Holy Sepulchre of Jerusalem, with whom he has travelled many times to the Holy Land. He enjoys horse riding and walking.