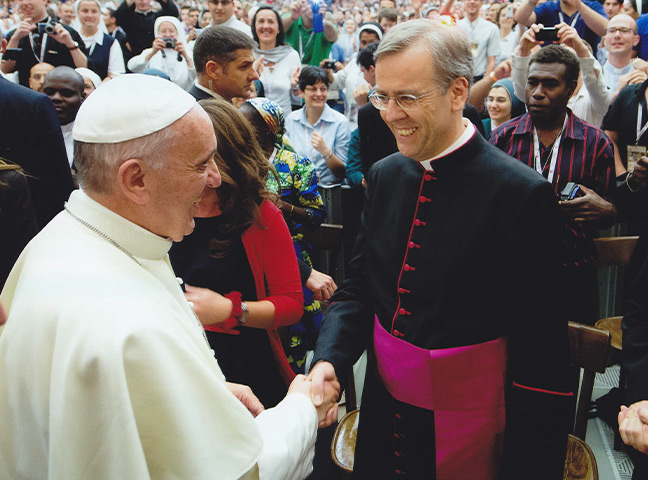 Pope Francis has appointed as the new Auxiliary Bishop of Westminster Monsignor Nicholas Hudson, a priest of the Archdiocese of Southwark, former Rector of the English College in Rome and since January 2014, the Parish Priest of Sacred Heart, Wimbledon.

Mgr Nicholas Hudson’s episcopal ordination will take place at Westminster Cathedral on 4 June at 11am.

“I feel both honoured and humbled to have been appointed by the Holy Father, Pope Francis, as Auxiliary Bishop of Westminster. I will do everything in my capacity to serve and assist His Eminence Cardinal Nichols in his ministry as Pastor of the Diocese.

“Coming from the south side of the Thames, I have always felt at home in both Westminster and Southwark. I look forward now to getting to know the Diocese of Westminster much better: the great number of clergy, laity, religious, parishes, schools, and colleges; the many people of other Christian denominations and of other faith traditions – and help them in our shared journey of faith.

“It is exciting to be a Catholic in this second year of the pontificate of Pope Francis. I pray that I might emulate the Holy Father’s radical simplicity and outreach to those on the margins of society and of the Church. Of all the many gifts received as a priest of Southwark most precious has been the privilege of knowing people with severe disabilities, who call us to make a place always for the poor at the heart of the Church.

“As I prepare to cross the river, my heart is full of gratitude to my home diocese, not least the Parish of the Sacred Heart, Wimbledon, where I first received the Faith. It has been a joy to serve there since January as parish priest: I am only sorry I cannot stay there longer. I thank my family; thank the priests and people of the parish where I was first a priest, in Canterbury; thank all those with whom I worked in the field of R.E. and Catechesis at the Southwark Christian Education Centre. I would wish to thank as well the staff and students of the Venerable English College: years of helping to form future priests in Rome rekindled within me that sense of mission with which I first offered myself for the priesthood some twenty-seven years ago, a mission which I feel privileged now to share with the people and clergy of Westminster.”

“I welcome most warmly the appointment of Mgr Nicholas Hudson as Auxiliary Bishop in Westminster Diocese. I thank our Holy Father, Pope Francis, for this appointment.

“Mgr Hudson will bring wide experience and fine personal qualities to our Diocese. He has served as a parish priest, as leader of catechetics and, of course, as Vice-Rector and the Rector of the English College in Rome. I know that he will be received enthusiastically on this side of the Thames by both clergy and laity. We look forward very much to the start of his ministry among us.

“I also wish to thank Archbishop Peter Smith and the Diocese of Southwark for their gift. Mgr Hudson will be much missed in his home diocese. This appointment is one of the ways in which dioceses serve each other and together enrich the leadership of our Church in this country.”

On learning of the appointment, Archbishop Peter Smith said:

“On behalf of the Bishops, clergy, religious and laity in the Archdiocese of Southwark, I offer my hearty congratulations to Mgr Nicholas Hudson on his appointment as Auxiliary Bishop in Westminster. I am very sorry that we will be losing him from Southwark but I know that Westminster will be very fortunate to have a new Auxiliary Bishop with a wide experience of dedicated priestly ministry over the past 28 years; in Canterbury, the Diocesan Christian Education Centre and as Vice Rector and Rector of the Venerable English College in Rome from 2000 until 2013. He will be missed especially by the parishioners of the Sacred Heart parish, Wimbledon, his home parish, to which he was appointed parish priest only this January. However, Southwark’s loss is Westminster’s gain – and will be very blessed to have him as one of their Auxiliary Bishops. I assure Mgr Nicholas of our prayers and good wishes as he prepares to take up his Episcopal appointment in Westminster in the near future.”

1986
Ordained to the priesthood on 19 July 1986 by Archbishop Michael Bowen in the Church of the Sacred Heart, Wimbledon

1987-91
Assistant Priest in the Parish of St Thomas of Canterbury, Canterbury

2014
Parish Priest of the Parish of the Sacred Heart, Wimbledon