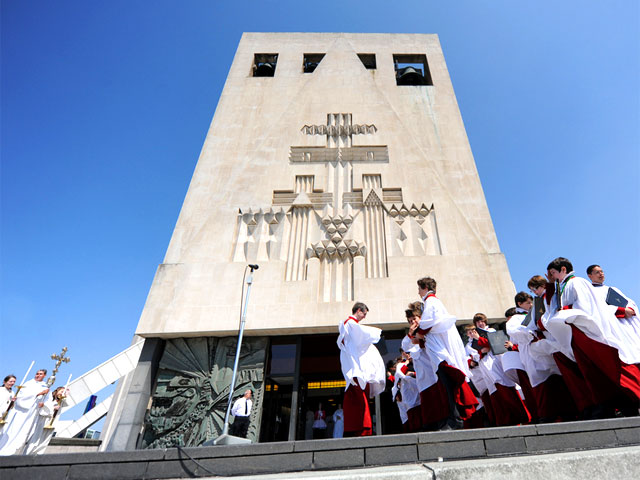 The Archdiocese of Liverpool is one of twelve Dioceses from across Europe chosen by the Pontifical Council for Promoting New Evangelisation to take part in a pilot scheme in preparation for a Synod to be held in October 2012 with the theme: ‘The New Evangelisation for the Transmission of the Christian Faith’. Others taking part are: Barcelona, Budapest, Dublin, Frankfurt, Lisbon, Mechelen-Bruxelles, Paris, Turin, Vienna, Warsaw and Zagreb. The ‘Missio Metropolis’, as it is known, is an initiative to make special efforts during Lent 2012 in mission, outreach and catechesis and then to reflect on this Lenten experience together so that some common challenges and themes can be explored which can feed in to the Synod.

The local theme for the Archdiocese is to be ‘Journey and Conversations’, Archbishop Patrick Kelly says:

‘Saint Thomas Aquinas wanted to sum up the whole of our Lord’s story in one line for the hymn he was composing for the feast of the Body and Blood of our Lord. He came up with “In mundo conversatus” (he had a conversation in the world.) And the greatest conversation, one we must all have at least once in our life was when “Jesus, tired out by his journey, was sitting by Jacob’s well. It was about noon. A Samaritan woman came to draw water”. The conversation enabled her to begin a new life, to appreciate what prayer and worship can be, and to acclaim that Jesus “is truly the Saviour of the world.” Seize every opportunity for a Lenten journey rich in conversation with the Lord. “Now may the God of peace, who brought back from the dead our Lord Jesus, the great shepherd of the sheep, by the blood of the eternal covenant, make you complete in everything good so that you may do his will, working among us that which is pleasing in his sight, through Jesus Christ, to whom be the glory forever and ever. Amen.”’

The Archbishop will preside at Solemn Mass and Choral Evening Prayer at Liverpool’s Metropolitan Cathedral of Christ the King on each of the Sundays during Lent. The Enrolment of Catechumens and Call to Continuing Conversion on the first Sunday of Lent and the Mass of Chrism are events celebrated by the whole Diocesan family at the Cathedral and special emphasis this year is to be placed on the call to mission and evangelisation.

The Metropolitan Cathedral is also to be a focus for the Sacrament of Reconciliation during Lent with extra periods of Adoration of the Blessed Sacrament during confessions between 4pm and 5pm each Saturday afternoon. The Archbishop will be available for confession along with Cathedral Clergy. The period of Exposition will conclude with Evening Prayer at 5pm.

Each Saturday evening during Lent at 9pm there will be a Vigil Service of sung Office of Readings with a reflection by Archbishop Kelly on the Vigil Gospel, including the accounts form Saint John about the woman at Jacob’s well in Samaria, the healing of the man born blind at the pool of Siloam and the raising of Lazarus at Bethany; this will take place at the Shrine of Blessed Dominic Barberi in Sutton, St Helens. Blessed Dominic is the nineteenth century Passionist Priest who received Blessed John Henry Newman into the Roman Catholic Church. On Saturday 31 March, the eve of Palm Sunday, this will be replaced by a performance of the ‘Via Crucis’ by Liszt with reflections by Archbishop Kelly at the Metropolitan Cathedral of Christ the King at 7.30pm.

On Friday evenings, at 7.30pm, during Lent Archbishop Kelly will be leading reflections on the theme: ‘Conversations of Eight Days’ at St Ambrose Barlow church, Astley.

With over three weeks still to go to Ash Wednesday, 22 February, parishes are planning Lenten talks, reflections, services and devotions including many early morning Masses at least once a week, some as early as 6.30am. As Lent approaches more information will be available about these and other initiatives.