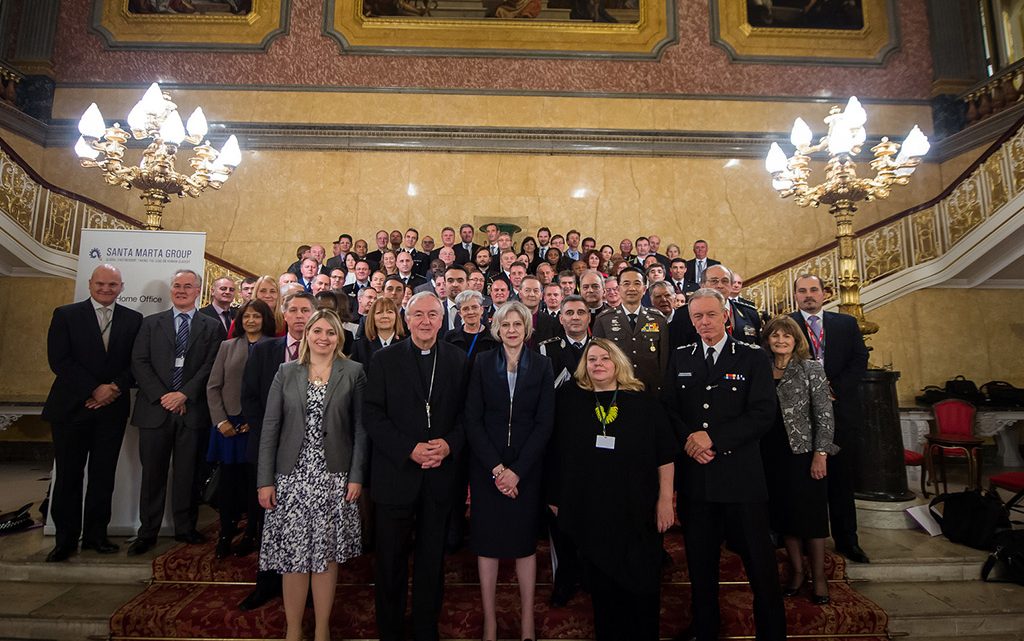 Police chiefs and Church representatives from across the world gathered in London alongside Home Office ministers for a Conference aimed at developing strategies to combat human trafficking.

The guiding principle of the Santa Marta Group is always to keep the welfare of the trafficked victim at the heart of all law enforcement.

The conference, which took place in London between 5-6 December, was organised by the Catholic Bishops’ Conference of England and Wales, the Metropolitan Police Service (MPS) and the Home Office.

The delegates came at the invitation of Cardinal Vincent Nichols, Archbishop of Westminster, and Met Police Commissioner Sir Bernard Hogan-Howe.

The conference was organised with the full support of the Home Office, which hosted the event at Lancaster House, and delegates were addressed by the Home Secretary Theresa May, and the Minister for Modern Slavery and Organised Crime, Karen Bradley MP.

At the launch of the Santa Marta Group, named after the Papal residence where the participants stayed in April 2014, Pope Francis described human trafficking as “an open wound on the body of contemporary society; a crime against humanity”.

The Santa Marta Group, led by Sir Bernard Hogan-Howe and Cardinal Nichols is an alliance of international police chiefs and Bishops from around the world, working together with civil society to eradicate human trafficking and provide pastoral care to victims.

It seeks to develop strategies in prevention, pastoral care and re-integration by working together internationally.

At its launch, the police chiefs signed a declaration of commitment in which they stated: “As senior law enforcement officials within the international community, we commit to eradicate the scourge of this serious criminal activity, which abuses vulnerable people.”

The conference at Lancaster House showcased and built on the joint police and church initiative in London that has been running for the past three years; a collaboration that is to be copied and adapted around the world.

Training modules and good practice will be shared and developed. Closer collaboration will also enable joint investigations between law enforcement agencies enabling a more co-ordinated international approach to rid the world from the scourge of the world’s second most profitable crime: estimated by the International Labour Organisation to generate $32bn annual profits for criminals, with 2.4 million people trafficked globally at any given time.

“I am delighted to be hosting the Santa Marta Conference, a forum dedicated to the eradication of Modern Slavery which brings together police chiefs and bishops from across the globe.

“This government has taken great strides to tackle this abhorrent crime. The publication of the Modern Slavery Bill is the first of its kind in Europe and gives law enforcement the tools they need to target slave drivers, ensuring their prosecution as well as the protection of their victims.

“But this is a problem that cannot be addressed through legislation alone. It requires action at all levels of society. That is why, last week, we published the Modern Slavery Strategy which makes it clear we must work together to tackle exploitation both here and overseas.”

“The Santa Marta Group is not about theory; it is focused on rescuing people who have become victims of trafficking and find themselves in an impossible situation.

“We meet again in London to continue this important collaboration between Church, police, government and civil society, reporting on the progress made this year and planning future area of work. Since April, The Church has launched the Bakhita Initiative, comprising a refuge for victims and a hub where good practice on prevention, pastoral care and reintegration will be developed and disseminated nationally and internationally, in addition to the ongoing work of the Santa Marta Group.

“The work against trafficking lies at the heart of the Church’s pastoral concern and ministry. There is much to be done, but the emergence of the Santa Marta Group’s international network is an important step towards helping the victims and fighting this crime.”

“I am proud that London is hosting the second Santa Marta Conference. It allows us to highlight human trafficking on an international platform and demonstrate the determination of church leaders, communities and our policing colleagues worldwide to combat these horrendous crimes.

“Knowing the full scale of the problem is an almost impossible task as those most vulnerable to exploitation often live at the margins of our society and the criminals hide in the shadows.

“However, this must not stop those who can help, from all nations, making the commitment to do everything they can to enable trafficking victims to escape the clutches of their captors and bring the criminals involved to justice.

“We know our collective efforts are not adequate to end this modern form of slavery and therefore we must all do more.”

catholicnews.org.uk/london-trafficking-conference-2014
Our web section for the December 2014 Trafficking Conference

catholicnews.org.uk/church-and-human-trafficking
The Church’s response to the crime of human trafficking