Podcasts: Join us on ‘Our Lenten Voyage’

Ash Wednesday, the start of Lent, falls on 1 March. Pancakes will have been digested and various achieveable and fanciful promises of abstinence will have been made.

For this year’s Lenten audio series, we’ve teamed up with Apostleship of the Sea, the bishops’ agency that looks after the practical and pastoral care of seafarers to bring you insightful weekly reflections from port chaplain Father Colum Kelly. Father Colum’s based out of Immingham – a port on the south west bank of the Humber Estuary near Grimsby.

As you might expect there’s a maritime theme and we’re pulling anchor and heading out to sea for a Lenten voyage.

The first week invites us into the wilderness. We read in the Gospel of the anguish of Jesus in the wilderness and all the uncertainties and trials that came his way in that bleak place.

“What do we need to do before setting off on this voyage?” Asks Fr Colum. “Before any ship leaves port there are a lot of checks that need to be carried out to see that our vessel is fit to make the planned voyage and also to make allowances for any unexpected twists along the way. Check cargo. Importance of our being ready and prepared for what we might face. We need to check that we have enough fuel and provisions to last us; but not too much for that will slow us down. We mustn’t carry anything unnecessary…

“…But for now, once we are sure the cargo is sorted, let’s cast off from the shore and voyage together into the vast wilderness of the sea and allow ourselves to be tested, just as Jesus was in his wilderness.

“The ropes are stowed, we have clearance from marine control and the sea will be our common home for the next six weeks.” 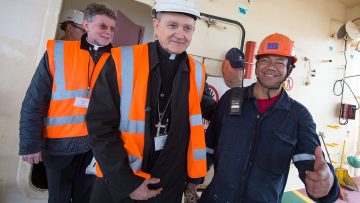 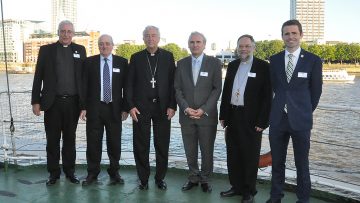 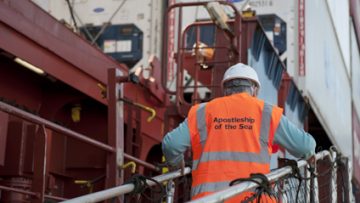 Pope sends message to Apostleship of Sea congress in Taiwan