Plight of Iraqi Christians: Bishops highlight harsh situation of refugees from Isis persecuted for their faith 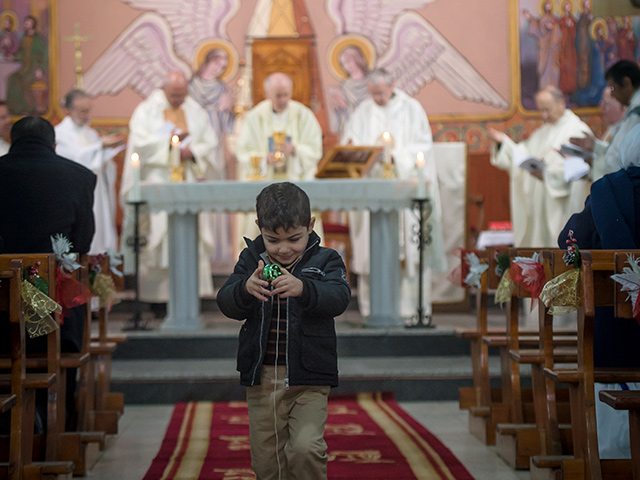 The plight of Iraqi refugees facing another long winter, 18 months after fleeing Isis in Mosul, will be highlighted on Monday by senior bishops in Jordan as part of a solidarity tour of the “forgotten” Christians of the Middle East.

The international group of mainly Catholic bishops will use their journey around the region’s beleaguered Christian communities to draw world attention to the harsh conditions faced by Iraqi Christians who were driven from their homes by the Isis advance in the summer of 2014.

Some 80,000 Christian refugees fled Mosul and the Nineveh Plain under threat of forced conversion or execution but remain inside Iraq in the Kurdish capital of Irbil.

Many of the further 8,000 who left for the Jordanian capital, Amman and have been living in churches or disused containers are now having to move into crowded, rented accommodation partly funded by the Catholic charity Caritas – while they hope for permits to allow them onward passage to North America and Australia.

The British bishops among the group are expected to use their visit to renew calls for the UK Government to admit more than the 20,000 Syrian refugees so far agreed to by David Cameron.

The bishops – who have Vatican backing – arrived in Amman on Sunday night after visiting both Gaza and the West Bank. They were turned back by Israeli troops while visiting West Bank farmland next to the Cremisan Monastery that has been seized by Israel to make way for the military’s planned separation barrier.

The Catholic Archbishop of Capetown, Stephen Brislin, said the army’s “show of force” and “intimidation” had reminded him of apartheid South Africa.

Earlier they had been welcomed to a Friday mass at the Holy Family Latin church in Gaza City’s Zeitoun neighbourhood by the parish priest, Father Mario da Silva, who pointed out that Pope Francis had designated 2016 as “the year of mercy”. Observing that prison visiting was one of the Church’s seven “corporal acts of mercy” Fr Mario added: “I thank you for visiting the biggest prison in the world.”

The message, delivered as the lights of the church’s tall Christmas` tree still twinkled – out of respect for the sister Greek Orthodox church in Gaza, which celebrates the nativity a fortnight later than Catholics – was clear. It was that members of Gaza’s ancient but now tiny Christian community of Palestinians – currently just 1,200 in all – fully share the plight of their 1.8 million Muslim co-habitants in the Hamas- controlled enclave after three wars, a nine-year Israeli trade embargo, draconian movement restrictions and a collapsed economy.

The sole Anglican in the group, Christopher Chessun, the Bishop of Southwark, said he had been encouraged by a renewal of resilience among Gazans since last year which was “deeply impressive” given “the pressures, difficulties and injustices” they were suffering. But he said the “disproportionate interference” in their daily lives meant there was “still a lid on Gaza,” so that “people of good will are being made to suffer”. While the only possible rationale was a security one, he said, “there is a danger… that Israel becomes its own worst enemy because… it will compound bitterness and resentment.”

Six nuns belonging to Mother Theresa’s Missionaries of Charity run Gaza’s only residential home for severely disabled children, almost all from poor Muslim families. The school run by another order, the Sisters of the Rosary, serves 83 Christian children. But the large majority of the 900 pupils– aged from three to 16 – are Muslim. And the YMCA has a series of sports, psychosocial and citizenship programmes, some specifically targeting boys and young men among whom there is 60 per cent unemployment,

All this helps to reinforce what seem generally pacific relations between Muslims and Christians in the enclave – if not always without strain for the latter. In 2006, when the Danish publication of Mohammed cartoons sparked Arab outrage, the Latin Church received faxed threats from what the then parish priest said were Fatah gunmen and members of Islamic Jihad’s military wing. While Hamas organised a huge demonstration against the cartoons, its leader Mahmoud al-Zahar promised at a meeting with Gaza nuns that there would be protection for Christians who “are our brothers”. Since then Dr Zahar’s promise appears to have largely held good, despite sporadic incidents involving extremist groups assumed not to be answerable to the Hamas leadership, including the murder in October 2007 of the Baptist manager of a Christian bookshop, Facing similar restrictions, young Christians mix freely with Muslim classmates.

“If I count them up I have three Christian friends and 13 Muslim ones,” said one student, Vivian, who is half way through her pharmacy course at Gaza’s al-Azhar university. She was refused an Israeli permit to join her parents on a Christmas visit to Jerusalem because she was under 35.

The bishops visited the Gaza Strip village of Khouza, one of the most devastated during the 2014 war, where the Catholic Relief Services agency has built 145 of a total of 420 timber “transitional” homes to replace those destroyed. CRS says it could have built 150 more had Israel not barred most wood imports.

Archbishop Brislin said he detected a return of the “spirit” of Gazans, but added: “The conditions are still appalling… People still have the sense of their livelihoods being controlled by a foreign power” and were asking “when this will end?”

While personally refusing to buy goods made in the Israeli settlements, he said he did not favour South African-style sanctions at present. “We must keep the doors open… Western governments should be pushing both sides to start a peace process again.” Meanwhile, as the clerics meet the refugees who fled Isis in Amman today, there is growing concern that Christians could miss out on resettlement in Britain because the accommodation provided by church organisations means they are not living in the UN camps from which Cameron has said refugees will come.

The group leader, the Catholic Bishop of Clifton, Declan Lang, acknowledged that was a “worry” but said the bigger worry was the “almost halving” of sympathy for all refugees after the Paris massacres, and that European attitudes had “hardened” against the refugees. “We must resist that temptation,” he said.

Bishop Lang said the refugee numbers heading for the UK must be kept under “constant review”. The Bishop of Southwark said he was “fully signed up” to the request for the total to be raised to at least 50,000, “because we have the capacity to do it. The Christian and other faith communities have the means to offer circles of hospitality, support and encouragement and help with [the refugees’] integration in the life of our nation.”

This article was first published online on 10 January 2016 at independent.co.uk.