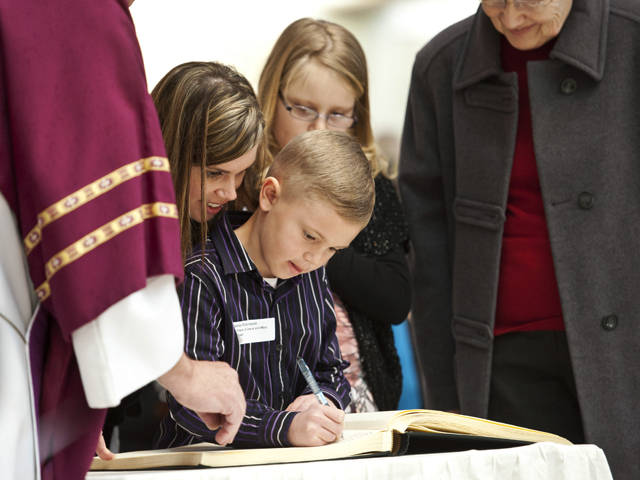 More than 4,700 people gathered in Cathedrals across England and Wales this weekend as part of their preparation to be received into the Catholic Church.

It is estimated that around 900 of those people will be received into the Catholic Church and registered as members of the Personal Ordinariate of Our Lady of Walsingham during Holy Week; this includes 61 former Anglican clergy in addition to the five who have already been ordained as Catholic priests.

The table below shows the number of people who attended the Rite of Election at their local cathedral at the weekend. In some dioceses, because of the vast distances between parish churches and cathedrals, not everyone who is preparing to become a Catholic was able to attend the gathering in the cathedral. This means that liturgies will also have taken place in some parish churches.

The people coming forward to be received into the Catholic Church are from all walks of life. A lorry driver, doctor, law clerk and a student are among several thousand people who are preparing to become Catholics. Bethany, for example, is a student at the University of Newcastle and will be received into the Catholic Church at Easter: ‘I think God has always been drawing me along my journey – at the difficult times and at the best times… I definitely think that the Journey in Faith will change my life.’

Meanwhile lorry driver, Michael, from Portsmouth shared: ‘One time when I visited St Mark’s Basilica in Venice, the peace was so tangible that I didn’t want to leave…it was something that I’d never experienced in my life before… I knew it was time for me to make enquiries about becoming a Catholic.’

For doctor, Clare, from Wadhurst Parish, the visit of Pope Benedict XVI to the UK was influential: ‘We watched virtually every step of his journey and my sons and I joined a pilgrimage to Hyde Park… All my prejudices and fears melted away as I recognised the love and humility shining out of his eyes.’

The number of people who participated in the celebrations at the weekend is as follows:

*This column includes people who are preparing to be baptised and also those who have been baptised in another Christian denomination. In addition, the column to the right titled ‘Personal Ordinariate’ indicates those who will be received into the Catholic Church and are registering to join the Ordinariate.

Bishop Kieran Conry, Chair of the Department for Evangelisation and Catechesis (Bishops’ Conference of England and Wales), said: ‘The witness of so many people taking this life-changing step is so very encouraging. Each year people freely choose to come forward from all walks of life, bringing with them unique experiences and talents. The Catholic Community welcomes them with love, friendship and the assurance of prayer. If you’re considering taking a similar step or are not sure yet, come and see. Give your local Catholic church a ring or ask a Catholic friend for help.’

Fr Keith Newton, who is the Ordinary (the priest who has pastoral responsibility) for the Personal Ordinariate said of those preparing to join: ‘I am greatly encouraged that these people will be received into the Catholic Church at Easter as members of the Ordinariate. During the next few weeks they will continue their prayerful preparation for this significant step.’

For more information about the Rite of Christian Initiation of Adults (RCIA) please see: rcia.org.uk. Those who are interested in becoming a Catholic are invited to contact their local Catholic parish. Also see the Catholic Enquiry Office’s website:life4seekers.co.uk

’Journey in Faith’ is the name that can be given to the meetings attended by those preparing to become Catholics.

When will the people who participated in the Rite of Election become Catholics?

Members of the Personal Ordinariate will be received into the Catholic Church during Holy Week.

Those not preparing to join the Ordinariate will be received into the Catholic Church at Easter.

rcia.org.uk
The RCIA Network is made up of people who have leadership roles in the RCIA process in Dioceses and parishes, and exists to support them in their work and to promote an authentic understanding of the Church’s teaching about the Rite.

Personal Ordinariate of Our Lady of Walsingham

Passing on the Faith: A Home-School-Parish Conversation
What does it mean to pass on faith in God within a family? What are the respective roles and responsibilities (and rights!) of homes, schools and parishes? How can parents and grandparents best be supported in their vocation?