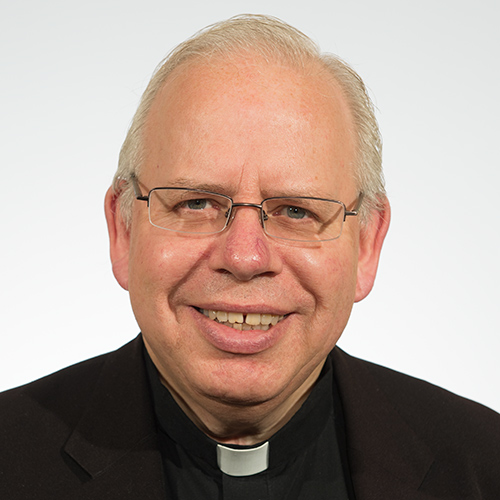 A profile of the Catholic Auxiliary Bishop of Southwark, the Right Reverend Paul Hendricks.

Paul Hendricks was born in Beckenham, Kent on 18 March 1956, the first of four children. He grew up in Orpington, Kent and attended Holy Innocents Primary School and St Mary’s Grammar School, Sidcup, Kent. On leaving school he went up to Corpus Christi College, Oxford in 1974 and was awarded a degree in Physics in 1977.

He worked for two years at the GEC Hirst Research Centre, Wembley before going to study for the priesthood at the English College, Rome, from 1979 to 1985. He obtained a Licence in Philosophy from the Gregorian University, Rome.

Ordained deacon at Palazzola, by Bishop Cyril Restieaux in 1983, he was ordained priest at Holy Innocents, Orpington, by Archbishop Michael Bowen in 1984. His first appointment, in 1985, as assistant priest was to St Boniface, Tooting. In 1989 he was appointed Philosophy Lecturer and Bursar at St John’s Seminary, Wonersh.

His next appointment was as parish priest of Our Lady of Sorrows, Peckham, in 1999 following the departure of the Capuchins. He also serves on the Diocesan Finance Committee and is the Diocesan Advisor on New Religious Movements and Cults.

He was ordained by Archbishop Kevin McDonald on 14 February 2006 and has responsibility for the South West pastoral area of the Archdiocese of Southwark.

He is a member of the Bishops’ Conference Department of Dialogue and Unity.