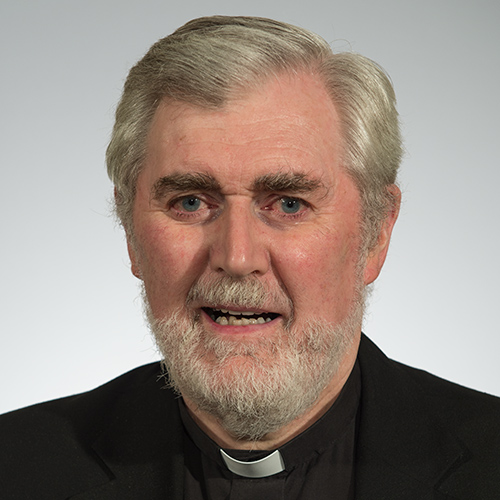 A profile of the Catholic Auxiliary Bishop of Southwark, the Right Reverend Patrick Lynch.

On leaving secondary school he entered the novitiate of the Congregation of the Sacred Hearts of Jesus and Mary in Cootehill, Co. Cavan and made a profession of temporary vows in August 1965.

Following completion of a diploma in social studies from the Richmond fellowship he was assigned to work in the parish of All Souls, Peterborough where he remained for two years. His next move was to the parish of Our Lady and St. Augustine, Daventry, Northants in the diocese of Northampton. He served there for nine years first as assistant priest and then as parish priest. It was at this time he became involved as a team priest in the ‘Engaged Encounter Movement’.

In 1984 he was transferred to London as director of the formation house of the order in London. During his time as formation Director he completed a Masters degree in theology at Heythrop College. In I987 he was appointed parish priest of Our Lady of Lourdes in Acton in the Archdiocese of Westminster where he served for two years as Vicar for Religious for the West Area of the Diocese. During this time he was one of a number of people instrumental in setting up ‘Emmaus House’ – Acton Homeless Concern – a parish based project for homeless people.

He completed his term as provincial in 1998 and came to the Archdiocese of Southwark to the parish of St. Thomas the Apostle, Nunhead soon afterwards. His ministry and involvement there with many different migrant communities led to his appointment to the mission commission of the Congregation in the year 2000. Since 2000 he has served as Episcopal Vicar for religious within the Archdiocese. In 2003 he was appointed parish priest of St.Chad’s South Norwood.

He was ordained by Archbishop Kevin McDonald on 14 February 2006.

Bishop Lynch is Chair of the Committee for Overseas Mission and is a member of the Bishops’ Conference Department of International Affairs. He also sits on the Mixed Commission of the Conference of Religious.