Following their involvement with the Winter Olympics, the churches of Vancouver and beyond are more united. That is the assessment of a delegation from the UK’s More Than Gold initiative that will help churches make the most of London’s 2012 Games.

The UK delegation, led by More Than Gold’s CEO David Wilson, learned the Canadian churches’ response to the Winter Olympics had involved around 350 churches. This record number had cooperated to serve the athletes, trainers and the thousands of visitors who poured into the region for the Games.

The church’s involvement, under the banner More Than Gold, involved over a dozen programmes. These included providing chaplains for the athletes’ villages, something that proved especially significant due to the tragic death of Georgian luger Nodar Kumaritashvili which cast a dark shadow over the start of the Games.

Equally valuable was the service of hot refreshments at transport hubs across Vancouver. Through these, thousands received free coffee and hot chocolate courtesy of the Christian community.

David Willson said, “We have watched history being made as hundreds of churches have united as never before to welcome and serve people from every corner of the globe. We have been witnessing longstanding barriers and misunderstandings being broken down around us”.

David added, “This shows the potential for UK churches as they plan to make the most of all that the 2012 Games offer the church through programmes of outreach, hospitality and service”.

The UK delegation included representatives from the Church of England, the Salvation Army, the Catholic Church, the Pentecostal Church and the Vineyard. “This visit,” said one delegate, ”has brought clarity and fresh vision to those of us representing the Christian community in Britain. 2012 offers us as the opportunity to be examples of the Olympic values of trust, honour, fairness, respect and decency, which are of course our own Gospel values”.

Leading the chaplaincy team in Vancouver was Dave Wells, the General Superintendent of the Pentecostal Assemblies of God. He explained, “Sensitive pastoral care is the often unseen thread that holds everything together at the Olympic Games. In few other places can the outcome of years of intense and focused discipline result in such an overwhelming sense of loss or of joy depending on the outcome of one event. This is true for both athlete and trainer. We are there offering support to those who require spiritual assistance to process every part of this journey.”

This helped the Winter Olympics conclude with cheers from red maple leaf drenched crowds that poured into streets following the goal that not only gave Canada the country’s 14th gold medal, but a license to celebrate for years to come.

Archbishop Michael Miller of the Archdiocese of Vancouver stated “It is such a great honour to be able to host some of the most inspirational and gifted athletes of the world in our city. Our young people are being renewed in their vision of the immense potential that exists within each one of them.”

Several of the UK delegation were able to attend the gold medal ceremony of Britain’s Amy Williams. One said afterwards, ‘The thought of twenty or more occasions like this on home territory in 2012 will have a profoundly uplifting effect on our nation, and especially our young people, and could deeply inspire us for years to come.”

With their eyes on the potential offered by the London 2012 Games, More Than Gold are committed to enabling churches to make the very most of the opportunity. Added David Wilson, “As we prepare for 2012, our hope is at least three thousand churches across the UK will mobilise with the work of More Than Gold to help best serve the nations of the world as they arrive on our shores.”

More Than Gold are asking UK churches to serve alongside LOCOG at the 2012 Summer Games, an event five times the size of the Games witnessed in Vancouver.

1. More Than Gold is a brand that Christian Churches have been using since 1992 leading up to the 1996 Atlanta Summer Olympic Games. Its unique label has been used for Christian outreach efforts at major international sporting events such as the Commonwealth, Pan Am, and Winter and Summer Olympic Games all around the world. One of its key roles is to mobilize Christians for service and witness throughout any particular event. More Than Gold’s work at the 2010 Vancouver/Whistler Olympic and Paralympic Winter Games can be seen at www.morethangold.ca.

2. All the main Christian denominations within the UK are on board with More Than Gold, as well as over 80 main Christian agencies and missionary organisations. More Than Gold was launched by the Archbishops of Canterbury and Westminster and other leading Christian figures, as well as by the charity’s Chair of Trustees Lord Mawhinney (also Chairman of the Football League), and the Minister for the Olympics, the Rt Hon Tessa Jowell MP.

3. The full message of Pope Benedict XVI’s message to the Archdiocese of Vancouver can be found at www.rcav.org.

5. For photographs relating to the Vancouver/Whistler Games, please contact James Parker at james.parker@cbcew.org.uk, 07930 119381. 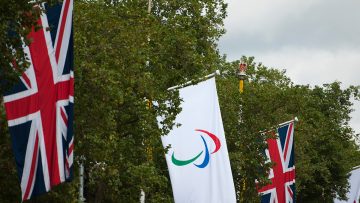 Paralympics a source of inspiration and hope