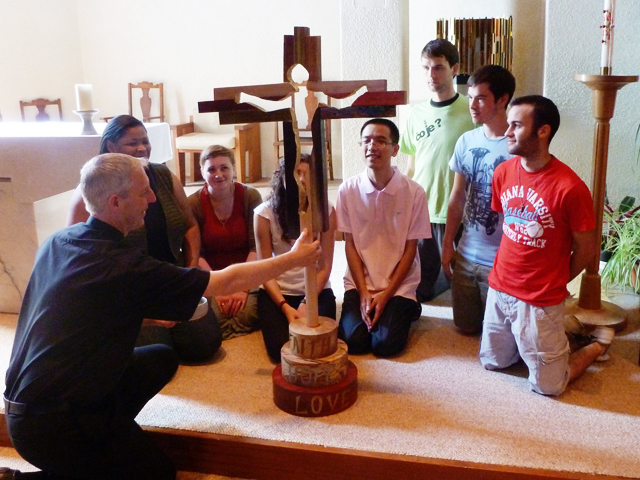 The Olympic Cross, specially commissioned for the 2012 London Games, has been blessed by Fr Simon Penhalagan, President of the Sion Community, Britain’s leading Catholic community for Evangelization.  This was witnessed by young people from six continents, each of whom will make up a part of the team at The Joshua Camp, the international Catholic Olympic camp suitably dubbed ‘Olympic World Youth Day’, which takes place in the heart of East London during the Games between 01 and 13 August.

The Cross was designed and created by artist Jon Cornwall from Walsingham House in Essex.  Speaking of his creation, Cornwall said: “I chose to use 12 different timbers from across the world to create the cross so as to represent the 12 disciples who were commanded to ‘go and make disciples of all nations’ (Matthew 28:19). The Olympic Cross has the same purpose: while each individual part may be rich with character, the whole is greater than the sum of its parts.”

The timbers chosen to make up the three-step base into which the Cross stands are: Sycamore (faith), Spalted Beech (hope) and Paduk (love), each one chosen deliberately to emulate something of each virtue.

James Parker, Catholic Executive Coordinator for the 2012 Games, said of the Cross: “We wanted to create a keepsake that symbolises everything the games truly represent, something we could then pass on to future Olympic host nations. As Christians our lives mean nothing without the Cross and so this seemed to be the most suitable object to commission for ourselves and as a future gift to others. We are very grateful to Jon Cornwall for his prayerful reflection and expert craftsmanship.”

Fr Simon Penhalagan said: “There is already a growing affection for this Cross among the young people preparing for The Joshua Camp. I am confident that those who will travel across the globe to be with us in London next week will also come to honour this Cross and in so doing will fall more in love with Christ.”

Parker went on to say: “We also owe deep gratitude as a church to the Sion Community. Their inspiration to run The Joshua Camp throughout the Olympics as a way of placing Christ at the centre of people’s lives is to be highly commended. They have chosen to serve the games way beyond that of any other Catholic organisation in Britain. The Joshua Camp might well become a global blueprint as to how sport and spirituality can begin to interlock at future global sporting events. This initiative is a powerful response to Pope Benedict’s call to find ways to draw modern hearts and minds to Christ.”

thejoshuacamp.com
More information from the official website for The Joshua Camp

For more information about Jon Cornwall

For more information about The Joshua Camp