Nuns on the Rise 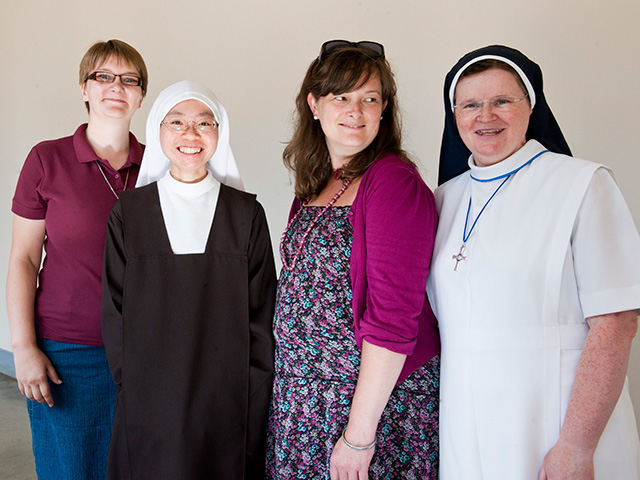 The number of women entering convents in England and Wales has hit a 25-year high. From a low point of just seven in 2004, the numbers have steadily increased to a high point of 45 in 2014. Religious life is an attractive choice for an increasing number of educated and dynamic young and older women.

Sr Cathy Jones, Religious Life Vocations Promoter at the National Office for Vocation explains why she thinks this is so:

“A key reason for this increase is the growth of a culture of vocation in the Church. Young Catholics are asking themselves ‘What is God’s plan for my life?’ and they are availing themselves of opportunities to meet with experienced guides to consider their future in the context of prayer, discussion and scripture.

“It is also significant that in recent years many religious congregations have grown in confidence in proposing their way of life, both through offering taster weekends and by participating in youth festivals, enabling potential ‘discerners’ to easily encounter religious and take the first steps to find out more about religious life.”

“There is a gap in the market for meaning in our culture and one of the ways in which women may find that meaning is through religious life.”

Theodora Hawksley, 29, until recently a postdoctoral researcher at the University of Edinburgh, joined the Congregation of Jesus a couple of months ago. She is now living in their house in North London and is taking the first steps towards making vows of poverty, chastity and obedience. She says:

“Entering religious life was a decision born of love. It was an acknowledgement that my life has slowly and concretely rearranged itself around the love of God, and around that relationship as the one I prize above all else.”

The Congregation of Jesus is an apostolic order working outside the cloister in a wide variety of different fields – in education, healthcare, evangelisation and more besides. Both ‘enclosed’ or ’contemplative’ and ‘apostolic’ orders are on the rise in terms of numbers – there has been a nine-fold increase in the number of active religious sisters and a fourfold increase in the number of enclosed sisters in England and Wales.

The General Superior of the Congregation of Jesus, an Englishwoman, Sister Jane Livesey – Theodora’s boss – says about the rise and the role of women religious:

“We have been delighted in the English province to have admitted a postulant at the start of this year and to have a further candidate actively discerning her vocation with us at the moment, both attracted in particular by our Ignatian charism and by our foundress the Venerable Mary Ward, the pioneer of women’s apostolic religious life, who as long ago as 1612, told her earliest members that ‘women in time to come will do much’.”

Mary Ward’s vision of an active, apostolic role for women in the Church met with opposition during her lifetime, but it finds an echo now in Pope Francis’ call for women to play a more ‘incisive’ role in the Church. In The Joy of the Gospel, he writes:

“The Church acknowledges the indispensable contribution which women make to society through the sensitivity, intuition and other distinctive skill sets which they, more than men, tend to possess.”

Sr Jane believes that religious life is one place where women can make just such an incisive contribution:

“It is historically the case that it is religious life that has given women a clear and recognised place in the Church and an opportunity to contribute very fully to the Church’s mission to be at the service of the people of God – whether ‘churched’ or ‘unchurched’. In our case in this country our current ministries include university and seminary teaching, hospital chaplaincy, spiritual accompaniment of all kinds, child psychotherapy and others besides. And we are only one group – there are many other congregations making equally significant contributions who are as grateful to God as we are that he continues to call women and men to follow him in the consecrated life, which, at the invitation of Pope Francis, the Church is honouring and celebrating in particular during 2015, the ‘Year of Consecrated Life’.”

A Vocations Sunday poster will run at a bus stop in Fiveways, Liverpool as from Thursday inviting people waiting patiently for their bus to ‘Change a Life’ by praying for vocations.

You can download a four-page PDF giving you a complete picture of Catholic vocations in 2014. Use the link below or to the right of this article.

ukvocation.org
Vocation Stats for 2014 can be found on the official National Office for Vocation website.