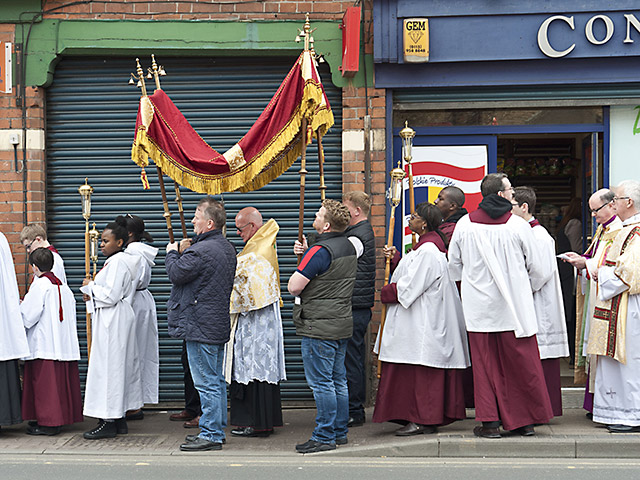 A loud and lively crowd of more than 400 Catholics from across the East Midlands took part in a Procession of the Blessed Sacrament to remember the Venerable Mary Potter – a nun who worked in Nottingham in the late nineteenth century to give dignity to the poor, the suffering and the dying.

The procession began from St Mary’s Church in Hyson Green, the suburb of Nottingham where Mary Potter lived and worked, and made its way to St Barnabas’ Cathedral, where she is buried. En route, the procession was passed by one of the city’s trams that is named after her. The crowd then paused outside the Mary Potter Centre, also named in her memory, which houses NHS and other public services in Hyson Green.

Led by the Bishop of Nottingham, Rt Rev Patrick McKinney, the procession included sisters from the religious order founded by Mary Potter, members of the city’s African, Indian, Irish traveller and Italian Catholic chaplaincies, and many others who gathered to walk together in praise of God and to celebrate the life of this remarkable woman.

Who was Mary Potter?

Mary Potter was born in London in 1833 and eventually came to Nottingham, where she founded the Little Company of Mary in 1877, when four companions joined her in a disused stocking factory in Hyson Green. Their mission was that of spreading the Gospel of Jesus Christ by word and deed, through the ministries of prayer for the dying, nursing, teaching and other pastoral activities.

In all that she did, like the world-famous Mother Teresa of Calcutta, she gave dignity to the poor and suffering, and the Little Company of Mary continues her mission throughout the world.

She died in Rome in 1913 and is now buried in St Barnabas’ Cathedral in Nottingham. She was declared ‘venerable’, an important stage on the journey to being recognised as a saint, in 1988, and is an example of faith in action for Catholics in Nottingham and beyond, who are encouraged to pray for her Beatification and Canonisation, so that she may be recognised as a saint.

Her tomb can be visited in St Barnabas’ Cathedral, and those who are interested in learning more about Mary Potter can visit the Heritage Centre in Nottingham city centre dedicated to her memory.

vimeo.com/channels/stations
Meditations from the Venerable Mary Potter were used in our short contemporary reflections for the Stations of The Cross on Good Friday. You can watch them on this Vimeo channel.

lcmsisters.org.uk
Learn more about the Venerable Mary Potter and the Little Company of Mary

bemerciful.co.uk
The Diocese of Nottingham’s website for the Year of Mercy