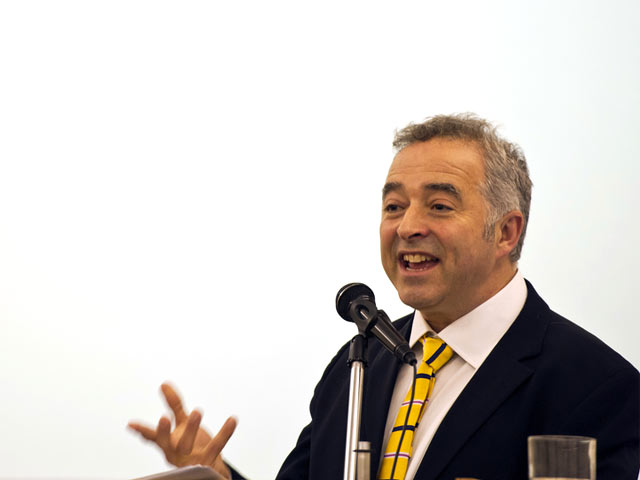 On the evening of Friday 28 October 2011 in London, the award-winning screenwriter and acclaimed author, Frank Cottrell Boyce delivered the Inaugural Newman Lecture 2011. The lecture was titled “A footling little parson: The greatest of English prose writers and focused on the craft of writing, exploring the source of a writer’s creativity and inspiration”.

Frank won a Carnegie-medal for his novel Millions – about a boy who is obsessed with saints – which was turned into a film by director Danny Boyle in 2004. He has most recently penned the official sequel to the children’s novel, Chitty Chitty Bang Bang. His other credits include the children’s book Framed (filmed by the BBC) and Cosmic (being filmed by Walden Media).

He also wrote the BBC play God on Trial which dramatised the apocryphal Trial of God which was – supposedly – staged by a group of rabbis in the Auschwitz concentration camp. Frank’s other screenplays include Welcome to Sarajevo, Hilary and Jackie and Twenty Four Hour Party People. He is currently working with Danny Boyle on the opening ceremony for the 2012 Olympic Games and in September 2011 delivered a BAFTA lecture.

The Newman Lecture is being offered in support of the legacy of the 2010 Papal Visit to the UK and is an initiative of the Bishops’ Conference Department for Evangelisation and Catechesis.

When Pope Benedict XVI beatified Cardinal John Henry Newman, a nineteenth century convert to Catholicism, he said: “Newman helps us to understand what this [holiness] means for our daily lives: he tells us that our divine Master has assigned a specific task to each one of us, a ‘definite service’ … The definite service to which Blessed John Henry was called involved applying his keen intellect and his prolific pen to many of the most pressing ‘subjects of the day’.”

Bishop Kieran Conry, Chair of the Department for Evangelisation and Catechesis, said: “Cardinal Newman was a very imaginative writer whose works not only influenced theological debate but he also left a treasure for people of all faiths and none in his hymns, prayers and meditations. The aim of the first Newman Lecture is to affirm the craft of writing and stimulate reflection and discussion about what makes for good writing and where does creativity and inspiration find its source.”

This year’s lecture was the first of three that will be delivered annually between 2011 – 2013 focusing on three aspects of Newman’s gifting highlighted by Pope Benedict XVI in the beatification homily: preaching, teaching, and writing.

The initiative is being coordinated by the Home Mission Desk of the Catholic Bishops’ Conference of England and Wales.

You can listen to the 30-minute lecture using the flash player in the top right hand corner of this article. Right click and ‘save as’ on the associated link if you want to download the mp3.

The Holy Father’s beatification homily is available from the official Papal Visit website. You will also find a section with more information about Blessed Newman.

After the event you will be able to see a photo gallery of the inaugural Newman Lecture on our Flickr stream.