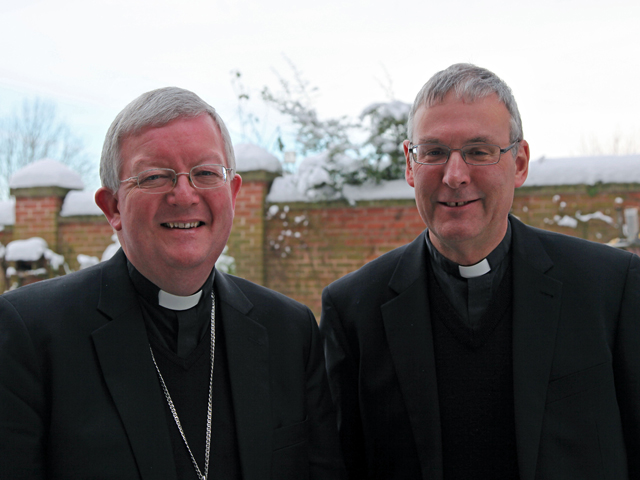 The Most Reverend Bernard Longley, Archbishop of Birmingham, has today, Tuesday, 22 January 2013, announced the appointment of Father David Oakley, at present Parish Priest of Our Lady of the Assumption, Maryvale, as the new Rector of St Mary’s College, Oscott, the diocesan seminary.

Fr David Oakley, aged 57, a former Procurator and Pastoral Director at Oscott College, will take up his appointment as Rector on 24 February.

Fr Oakley said today: “In this Year of Faith, it is both humbling and an honour to be asked by Archbishop Bernard Longley to become the next Rector of St Mary’s College, Oscott. The College is dear to my heart as my alma mater. My generation of students were fortunate to have been formed for the priesthood by so many gifted priests and others who were part of the staff at that time. It was a privilege to serve the College later as Procurator and Pastoral Director. It will be an exciting task once again, to be involved in the life and work of this wonderful seminary. I look forward to the challenge to succeed Mgr Mark Crisp, and his many excellent achievements over the past decade.”

Fr Oakley emphasised: “Oscott has a fine tradition and history, and there is much to be proud of. In truth, we can look to the future with hope and expectation. There are signs that more men are accepting the Lord’s invitation to follow in the footsteps of the Good Shepherd Himself. Pope Benedict XVI has encouraged all of us to engage with the New Evangelisation. We are therefore invited to reflect upon the faith we proclaim in a theological work of thorough and authentic reflection. Furthermore, and especially at this time, we are to ponder how the disciples of Christ may engage the hearts and minds of our generation, so that they can be helped to know in a personal way the Gospel truth.”

Fr Oakley added: “For sure, these are changing times. The ministry of the ordained minister is always a contradiction within a society that no longer values the transcendent. Furthermore, today’s priests must open their hearts and minds to new missionary demands in ever-shifting situations. It is with the bold confidence of St Therese of Lisieux, Patroness of the Missions, that I undertake the task of becoming Rector of Oscott College.”

Archbishop Bernard Longley said today: “I am delighted that Fr David Oakley has accepted my appointment of him as Rector of St Mary’s College, Oscott. With his fine pastoral and academic record he brings a strong and clear vision of priestly ministry and formation that reflects the mind of the Church today on priestly formation.

“Fr Oakley also brings personal wisdom and sound insights to his new work as Rector and he will continue to unite the seminary in a common vision and purpose for the service of the Church.”

Archbishop Longley added: “I owe an immense debt of gratitude to Mgr Mark Crisp, as he hands on responsibility for Oscott to Fr Oakley, for his outstanding work as Seminary Rector over the last twelve years. I am especially grateful to him, amongst many other things, for hosting the Apostolic Visit of Pope Benedict XVI to Oscott in 2010 and for welcoming the seminarians from St Cuthbert’s College, Ushaw to Oscott in 2011. I wish him every blessing as he looks forward to a well-deserved sabbatical break.”

Fr Oakley published his doctoral thesis under the title “Pastoral Ministry” (Pentland Press). His hobbies include walking and theatre. He has supported Aston Villa Football Club since he was a lad.

Mgr Mark Crisp, aged 53, who has been Rector of Oscott College since 2001, will be taking a well-earned sabbatical.

Mgr Crisp said today: “I am very grateful for the all the blessings I’ve received during my time as Rector and it has been a real privilege to work with the seminarians who are so full of energy and enthusiasm for the mission for the Church.”

Mgr Crisp added: “It gives me great pleasure to hand on this role to Fr David Oakley who I’m sure will bring fresh vision and new vitality to St Mary’s College.”

At present St Mary’s College Oscott has 54 students studying for the priesthood, 10 of whom are for the Archdiocese of Birmingham.
Pope Benedict XVI, after he had Beatified Blessed John Henry Newman, during Mass at Cofton Park, in Birmingham, on the morning of Sunday, 19 September 2010, travelled by car to Oscott College where he addressed the Bishops of England, Scotland and Wales.

The Holy Father spoke in the College Chapel where the then Father Newman preached his famous “The Second Spring” sermon, on 13 July 1852, at the First Synod of the New Province of Westminster, held at Oscott College.