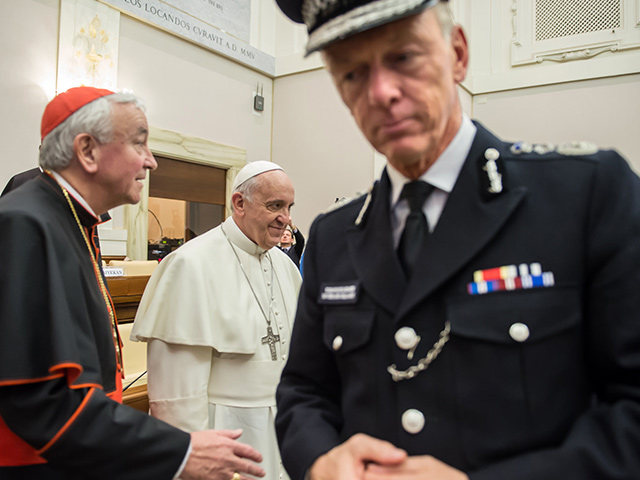 Writing to Cardinal Vincent Nichols, President of the Catholic Bishops’ Conference of England and Wales, Pope Francis has sent a message to the police chiefs, government officials and bishops gathered in London for an international conference on human trafficking. “We must never forget, nor may we ignore, the suffering of so many men, women and children whose human dignity is violated through this exploitation.”

I extend greetings to you and all the delegates gathered for the conference to discuss continued efforts in the fight against human trafficking.

I am deeply grateful to all present for your resolve in combating this evil and for your commitment to carry on the work begun at the conference held in the Vatican in April of this year.

Your labours to promote ongoing dialogue on the legal remedies to human trafficking and on the essential care of those who suffer this enslavement are especially important because of the hidden nature of this crime.

We must never forget, nor may we ignore, the suffering of so many men, women and children whose human dignity is violated through this exploitation.

I thank the Home Secretary of the British Government, the Metropolitan Commissioner of Police, and the Bishops’ Conference of England and Wales for organizing this event and the delegates who demonstrate anew their commitment by their participation in this initiative.

In assuring you that the Church remains steadfast in her pledge to combat human trafficking and to care for the victims of this scourge, I offer the promise of my prayers that Almighty God may bless and guide your efforts.

‘Taking the lead on human trafficking’, the second international conference of the Santa Marta Group, meets at Lancaster House in London from 5-6 December 2014.

catholicnews.org.uk/london-trafficking-conference-2014
Our web section for the December 2014 Trafficking Conference

catholicnews.org.uk/trafficking-conference-videos
Videos relating to the Church’s response to Human Trafficking, the Bakhita Initiative and the Santa Marta Group

catholicnews.org.uk/church-and-human-trafficking
The Church’s response to the crime of human trafficking