It was a special moment for the bishops of England and Wales who are finishing their week together in Rome for their five-yearly meeting with the Pope. This visit, known as their ‘ad Limina’, enabled them to discuss with Pope Benedict the current situation of the Catholic Church in England and Wales and its most urgent challenges. It was also an opportunity for the Pope to officially announce his intention to visit England and Wales later on in 2010.

In view of the forthcoming beatification of Cardinal John Henry Newman (1801-1890) possibly during the Pope’s visit, the bishops particularly wished to visit two places connected to the life of the cardinal. This took them to the Chapel of the Three Kings and the Cardinal Newman chapel inside Missio headquarters, where Cardinal Newman celebrated his first mass. On 3 February, the bishops, led by the President of the Bishops’ Conference, Archbishop Vincent Nichols of Westminster and accompanied by Cardinal Cormac Murphy-O’Connor, were hosted by Cardinal Ivan Dias, head of the Congregation for the Evangelization of Peoples, and the staff of Missio.

Cardinal Dias, Cardinal Murphy-O’Connor and Archbishop Nichols concelebrated Mass in the Chapel of the Three Kings, where Newman was ordained a Catholic priest. The Archbishop of Westminster spoke about ‘the constant call to conversion’ that resides in the heart of everyone and seen clearly in the life of Cardinal John Henry Newman, who will hopefully soon be beatified (declared ‘blessed’). He also spoke of the great longing that Newman experienced for a ‘universal and infallible authority,’ which was what ‘eventually led him here.’ In fact, Newman was not only ordained a priest and said his first Mass in the chapel in what is now the headquarters of the Missio, but he also lived and studied inside the building. Archbishop Nichols called Newman ‘a remarkable convert’ and said that it was ‘moving for us to be in this place, where we come so close to him.’

As Archbishop Nichols mentioned at the close of the Mass, this visit to the chapel of Cardinal Newman’s ordination as a Catholic priest, had been a ‘precious part’ of their visit to Rome and would remain forever in their memory.

After the Mass, Bishop Michael Campbell of Lancaster commented that the forthcoming beatification of John Henry Newman, ‘a great Englishman,’ was an important event in the Catholic Church, but also for the ecumenical movement in England and Wales, as he is ‘revered by Catholics, Anglicans, and all as a scholar, a gentleman, and soon a saint.’

In Missio’s London office, Monsignor John Dale, the National Director, commented, ‘It is a great privilege for Missio in this country to be associated with such an important person as Cardinal Newman. Just as Newman bridged a gap between Catholics and Anglicans at a time when relationships were not always easy, so Missio works to bridge differences in language, culture and religion as it works across 120 countries to support the Church in the developing world. That Newman spent such a significant period of his life in the building that would become the headquarters of Missio’s global outreach to the poor and suffering makes his forthcoming beatification a very special celebration for Missio in England and Wales.’

After his reception into the Catholic Church in October 1845, Newman went to live in Maryvale, then a few miles from Birmingham. It was decided that he would undertake studies in Rome, where he arrived in October 1846. He lived at Propaganda Fidei, today the Congregation for the Evangelisation of Peoples, and still in the same buildings by the Spanish Steps. He and Ambrose St John made contact with the Roman Oratory (the Chiesa Nuova), making friends particularly with learned Fr Theiner. In fact, the most important feature of the whole of Newman’s 1846-47 stay in Rome was his gradual realisation that the Oratory was to be his Catholic vocation (which Wiseman had already suggested to him in England). He made a novena of daily pilgrimages to St Peter’s (corresponding to the current week of Prayer for Christian Unity) from 18th-25th January 1847 for light on the matter.

After Newman’s ordination as deacon (along with Ambrose St John) in St John Latern on 29th May, he was ordained priest by Cardinal Frasoni, the Prefect of Propaganda Fidei in the Church of Propaganda, on Trinity Sunday, 30th May. On the feast of Corpus Christi (3rd June) Newman celebrated his first Mass in the Jesuits’ chapel on the altar of St Hyacinth (at Propaganda)[1].

Newman wrote in his novel Loss and Gain (p. 327f): “I could attend Masses for ever and not be tired. It is not a mere form of words, —it is a great action, the greatest action that can be on earth. It is, not the invocation merely, but, if I dare use the word, the evocation of the Eternal. He becomes present on the altar in flesh and blood, before whom angels bow and devils tremble. This is that awful event which is the scope, and is the interpretation, of every part of the solemnity. Words are necessary, but as means, not as ends; they are not mere addresses to the throne of grace, they are instruments of what is far higher, of consecration, of sacrifice.”

On 28th June 1847 Newman, Ambrose, and other members of his new community who had now come over from England, began their Oratorian Noviciate in the monastery of St Croce near to St John Lateran.

The altar at which Newman had celebrated his first Mass was moved in 1935 to the new buildings of the Collegio Urbano (the ‘University’ part of Propaganda was moved to the Gianicolo hill), but some years ago it was restored to its original place in Palazzo di Propaganda Fidei by the Spanish Steps.

The chapel where it stands is now known as the Cappella Newman. This is where the present Archbishop of Canterbury, Dr Rowan Williams, prayed for Christian unity during a visit to Rome.

Newman concludes his famous Apologia pro Vita Sua (1864): ‘And I earnestly pray for this whole company, with a hope against hope, that all of us, who once were so united, and so happy in our union, may even now be brought at length, by the Power of the Divine Will, into One Fold and under One Shepherd.’

[1] Newman had written in November 1846: “[Rome] is a place to make one a good deal better, if one is properly disposed, were it only to be at the shrines of so many martyrs. There are relics of one in this house, close to my room – St Hyacinth’s, which were found in the catacombs with his grave stone over him not long ago.” 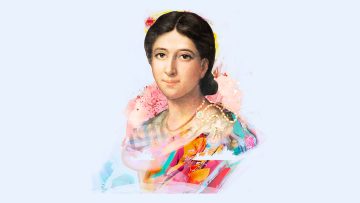 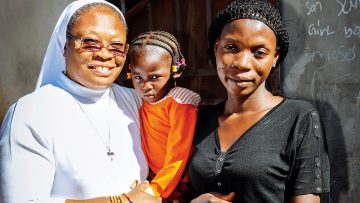 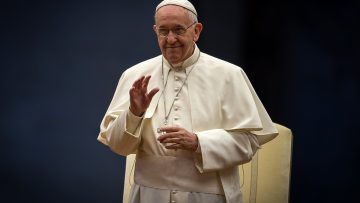